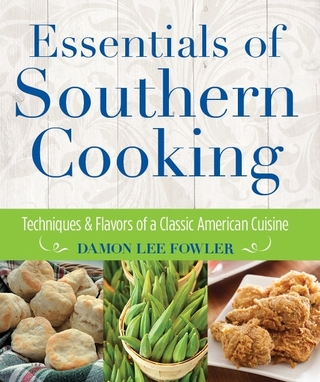 A collection of more than twenty-five years of writing about and teaching the history and techniques of the cooking of my native American South, the collection of cuisines that we loosely call Southern Cooking. Rather than focusing on the history of the cooking, as many of my previous books have done, these recipes pay tribute to that past, but reflect the way Southerners cook today. This book debuts right after Thanksgiving of 2013.

“[Damon Lee Fowler’s] simple yet elegant recipes, entertaining and insightful headnotes, and excellent sense of place and history, make all of his books culinary stand-outs. This new and fully updated combination of two earlier books will bring twice as much delicious South to your mouth.”

“Bravo to Damon for bringing the classics of Southern cooking to today’s modern cook. All the essentials are here, with a delicious nod to new tastes like Asparagus Shortcake and Peach-Orange Marmalade. It’s a love letter to the foods I crave.”

“Damon Fowler’s mastery of Southern cooking shines through this book. It feels like Damon is standing patiently by, guiding, giving a bit of kitchen wisdom, then tossing in a fact no one else knows—such as the first recipe for Pimento Cheese or something about Thomas Jefferson—while telling a story that captivates. His voice is unique, his teaching skills whetted by years of student cooks, and his recipes stand the test of time.”

—Nathalie Dupree, author of Mastering the Art of Southern Cooking and host of cooking shows on PBS, the Food Network, and TLC

“No one knows more about Southern cooking, its origin, its evolution, and its place among world cuisines than Damon Le Fowler. Essentials of Southern Cooking puts Damon’s wisdom, grace, and passion for all things Southern between two covers. And that includes the most tantalizing, lusciously photographed collection of recipes to come my way in ages. I can’t wait to begin cooking my way through Essentials. It belongs in every kitchen—front and center.”

—Jean Anderson, James Beard Cookbook Hall of Fame author of A Love Affair with Southern Cooking and From a Southern Oven

“Gorgeously produced and exquisitely written, Damon Lee Fowler’s book expertly captures time-honored recipes that have been passed from generation to generation, as well as illuminates the newer influences of the Southern kitchen...”