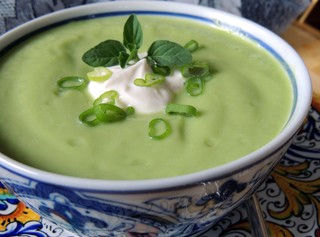 People often ask why I never considered opening my own restaurant. My ready answer is that I'd as soon climb onto a chair, put a noose around my neck, and jump. I like cooking and want to keep it that way. But it's actually deeper than that: the truth is I've cooked professionally—only a little, but just enough for me to promise myself I'd never do it again.

While awaiting the publication of my first cookbook back in the early nineties, in what can only have been a moment of complete insanity, I let myself get talked into running the kitchen of a lunch café in downtown Savannah. The owner, who I suspect was a few bricks shy of a load (for goodness' sake, she'd hired an ex-architect who'd never cooked professionally to run her kitchen), had decorated the place without any idea of what kind of food it would offer.

Nor had any thought been given to how that food would be prepared. The kitchen was equipped with an old domestic electric range and refrigerator, two slow-cookers, and a deli case. Even I could see that this was going to be an uphill struggle.

Taking those limitations into consideration along with walls that had been painted hot pink and covered with the owner's collection of Caribbean/Latin American art, the menu clearly needed to be at least inspired by that same part of the world—and as simple as possible.

But one of the good things to come out of that experience was that I learned how to make many simple yet delicious things either from, or inspired by, tropical Latin America. Some have remained a staple in my kitchen to this day, especially when summer's heat settles in.

One such dish is this delightful and wonderfully easy chilled soup. It's perfect for hot weather since it requires no cooking. And the only skills required are a little dicing, a very little chopping, and a steady finger on the switch of a blender or food processor.

A lovely first course for a cold menu or one of grilled food, this also makes a cooling and satisfying main dish meal for two. For each serving, simply add a spoonful of medium-dry sherry to the bowl before ladling in the soup, then add half a cup of lump crabmeat or diced cooked and peeled shrimp (or combination of both) to the garnishes.

Serves 4 as a first course, 2 as a main dish

1. Peel, pit, and cut 2 of the avocados into chunks. Put them in a blender or food processor with the broth, grated shallot and garlic, oregano leaves, and lime juice. Season lightly with salt and cayenne or hot sauce. Process until smooth. Taste and adjust the lime juice, shallot, garlic, salt and cayenne or hot sauce, pulse to mix and pour into a glass bowl or plastic storage container. Cover with a plastic wrap laid directly on the surface of the soup and chill at least 2 hours.

2. When you're ready to serve it, remove and discard the wrap, stir, and if it's too thick to suit you, thin it with chilled water. Taste and adjust the seasonings. Peel, pit, and dice the remaining avocado. To serve, ladle the soup into chilled bowls and garnish it to taste with sour cream or yogurt, diced avocado, diced tomato, scallion greens, and oregano sprigs.