31 March 2021: An Intimate Easter Dinner III—Gratin of Potatoes with Herbs and Scallions 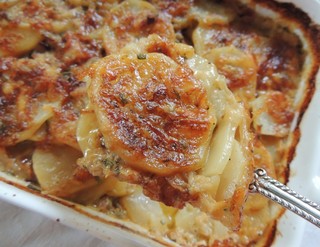 Classic Gratin of Potatoes with Herbs and Scallions

For those who prefer potatoes as the starchy side at Easter, an alternative to the pasta suggested earlier is this luxurious but simple potato gratin. Based on a classic French one, it's usually made with caramelized onions, but here thinly sliced scallions and a few spring herbs give it a fresh lift and make it a fine accompaniment for either lamb or ham.

Actually, it's pretty compatible with just about anything, and is also lovely with poultry (especially roasted), fish, pork, and venison.

The only real work is grating cheese and scrubbing, peeling, and slicing potatoes. And, actually, those probably don't even have to be peeled if you like the skins. Once those chores are done, it's just a matter of tossing it together and popping it into the oven.

The great thing is that it's pretty sturdy and can be made completely ahead, although it does have to be baked as soon as it's assembled or the potatoes will discolor. Fortunately, it can be made up to a day ahead, since it reheats beautifully. The microwave will do an adequate job, but it's better if it's slowly reheated in a conventional oven.

Gratin of Potatoes with Herbs and Scallions

If you're baking the gratin ahead to serve the same day, let it cool then loosely cover and leave it out at room temperature for up to 4 hours. If you're baking it a day ahead, let it cool completely before covering and refrigerating it. Take it out at least an hour before you plan to serve it, and let it sit at room temperature for 30 minutes before reheating.

Reheat it in the center of an oven preheated to 350° F. for 25-30 minutes, or until it's hot and the center registers 165° F. If it starts to get too brown before it's heated through, loosely cover it with foil, making sure that the foil isn't touching the top.

The cream often separates in the reheating, but it still tastes wonderfully good.

Salt and whole white pepper in a peppermill

Whole nutmeg in a grater

1. Position a rack in the center of the oven and preheat to 350° F. Butter a 2½-3-quart gratin or other shallow baking dish.

2. Wash, trim, and pat the scallions dry. Thinly slice them. Scrub, peel, and thinly slice the potatoes with a sharp knife or mandoline. Put both onions and potatoes in a large mixing bowl and add 1½ cups of the cheese and all the herbs. Season well with salt, pepper and nutmeg and gently toss to mix. Pour the cream evenly over it and again gently toss until everything is evenly coated.

3. Pour the potatoes into the prepared dish and spread them evenly, leveling the top. Sprinkle with the remaining ½ cup of cheese and bake 1¼-to-1½ hours, or the until potatoes are very tender, the top is golden brown, and it's bubbly at the center. Serve hot.