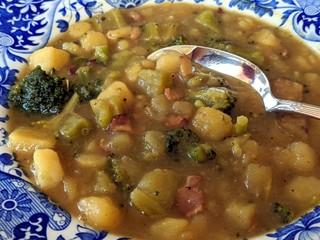 The older I get, the simpler my cooking seems to become. Whether it's because our aging palates develop at taste for simpler flavors or we just get lazy is a toss up, but the change has been so gradual that it might've gone unnoticed had it not been for the pandemic.

Through this time of isolation, our comfort favorites have been repeated over and over, and I've begun to notice how they've gotten simpler, both in their composition and execution. And it's had its merits. Stripping away extraneous layers, steps, and ingredients has made for cleaner, more direct flavors, not to mention a whole lot less fuss.

This soup is a good example. It's been a part of my regular cold-weather repertory for at least twenty years, and with each of those passing years has been evolving without my really being conscious of it.

The changes haven't been big: the first was to the onion, which was originally a larger bulb that was sliced. Dicing allowed it to distribute more evenly and made it much easier to eat with a spoon, and the smaller amount turned out to be a better balance.

The next change was that all the vegetables were originally sautéed in stages, including the potatoes. But sautéing the potatoes added nothing and was tedious, since they tended to stick, and didn't cook any more quickly once the broth was added.

Finally, the original version was enriched with milk, which was just making the soup heavy without adding anything worthwhile to the flavor. It's possible that it was first omitted on a night when I didn't have any, but no matter: the soup was better without it.

The point of this ramble is that finally noticing that my cooking has continued to evolve has been a needed reminder that nothing in this life stays the same. And in this time when everything has changed, we need reminding that not all change is necessarily bad—and even bad ones can be useful if we look at them in the right way.

This soup can be served in smaller portions as a first course or be paired with a sandwich for lunch or supper, but we always have it as a one-dish evening meal. There are just two of us, but I still make it in this quantity so we can get two meals out of it.

Usually I make it ahead and reheat it regardless, because its flavors meld together better and it naturally thickens when cooled and reheated. Use medium low heat to warm it again, stirring often to keep it from scorching. You may also need to thin it with a little water if it's gotten too thick.

1. Trim the cut end of the broccoli stems and wash well under cold running water. If it's not as fresh and taut as you'd like, stand it in a bowl of cold water for 15-20 minutes, or until rehydrated and firm. Drain well. Using a vegetable peeler or sharp peeling knife, peel the stems until all the woody outer skin is removed. Cut the florets from the stem and cut the stems into bite-sized dice. Break or cut the florets into bite-sized pieces.

2. Sauté the bacon in a 3-4 quart, heavy-bottomed pot over medium heat until it is golden brown and its fat is rendered, but not crisp. Spoon off all but 2 tablespoons of the fat and add the onion. Sauté until softened and golden, about 3-4 minutes.

3. Add the broccoli stem pieces and sauté, tossing occasionally, until they're bright green, about 2 minutes. Pour in the broth and bring it to a boil, stirring to loosen any cooking residue from the bottom, then add the potatoes, season lightly with salt and pepper, and let it come back to a boil. Adjust the heat to maintain a steady simmer, and cook, stirring occasionally, until the potatoes are very tender, about 10 minutes.

4. Stir in the broccoli florets, raise the heat, and return it to a simmer, stirring often and mashing a few of the potatoes against the sides of the pot to thicken it. Adjust the heat to a gentle simmer and cook, again mashing some of the potato until the soup is thick enough to suit you, another 5-10 minutes. Taste and adjust the salt and pepper, let it simmer a minute or two, and serve, if liked with cheese passed separately.