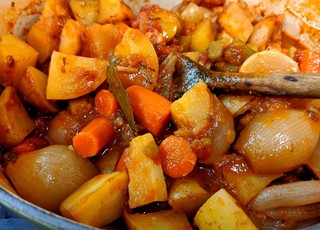 It's been one of those cold, wet Sunday afternoons in Savannah, the kind that's perfect for having a hearty, comforting stew simmering in the kitchen.

"Stew" for most of us brings to mind chunks of red meat or poultry simmering for hours in rich brown gravy. But there was no meat in the house nor time for an endless simmer. Happily, "stew" is a technique that isn't just for meat; it can be applied to just about anything. And the time it takes depends on what's in it.

This vegetable stew is hearty, rich, and warming without being heavy, and was done in little more than an hour start to finish. And if, as I did, the time you have to make it is well ahead of mealtime, all the better. It's flavors are improved by being made ahead and reheated and its gravy gets thicker.

Stews like this are wonderfully adaptable. Change the vegetables to suit your tastes or to accommodate what happens to be in your vegetable bin. Enrich it by adding diced and browned bacon if you must have some meat in it, draining off and discarding the fat before sautéing the vegetables or else substituting it for the oil and butter called for.

Dried herb blends such as Herbes de Provence or Italian Seasoning can be substituted for the herbs and it can be spiced up with a bit of cayenne or a few dashes of hot pepper sauce. But don't get carried away: the vegetables are the stars here, and they won't shine if they're covered up.

3 small or 2 medium-sized turnips, scrubbed, trimmed, and quartered or cut in 1-inch chunks

8 small red-skinned or gold potatoes, scrubbed but not peeled, quartered or cut in 1-inch chunks

Crusty baguette or other crusty homestyle bread, for serving

1. Bring 2 quarts of water to a rolling boil over medium high heat. Cut an X into the root end of the shallots or boiling onions, add them to the boiling water, and cook 1 minute. Drain and rinse well under cold running water, then trim the root and stem ends and peel them. If the shallots have more than one bulb in a cluster, separate them.

3. One at a time, add the whole shallots, carrot and celery chunks, parsnips, and turnips, sautéing each one until they're glossy and hot, about a minute each. Add the garlic, rosemary, and sage and sauté until fragrant, about 30-45 seconds.

4. Raise the heat to medium-high and add the broth, tomatoes, bay leaf, a tablespoon of Worcestershire, and season lightly with salt and pepper. Bring it to a boil, stirring occasionally. Lower the heat to a slow, steady simmer, loosely cover and simmer gently until the vegetables are barely tender, about 25-30 minutes.

5. Add the potatoes, raise the heat long enough to bring it back to a boil, and once again adjust the heat to slow simmer. Simmer until everything is tender, about 15-20 minutes longer. Taste and adjust the salt, pepper, and Worcestershire. Simmer 2-3 minutes longer and turn off heat. Let the stew settle for 10-15 minutes. Sprinkle each serving with parsley and serve with the baguette.