20 April 2020: Improvising on the Routine in Quarantine 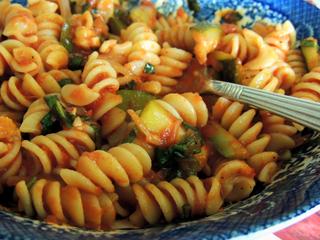 Fusili (Rotini) Pasta with Zucchini, to which chicken can be added as it was in the accompanying recipe

A social-media query that has often been bandied about among the curious (or merely bored), in this time of pandemic-induced social isolation, is whether or not it's had a significant impact on our individual cooking patterns.

Are we cooking more? Are we experimenting more? Have irregular shortages of certain staples such as meat, flour, eggs, milk, and pasta impacted what we do cook?

For my part, not much has changed. I routinely cook every day, and other than developing a recipe for a newspaper column, the only real difference in what I cook is that I'm tending to be less experimental, and am falling back more and more on things I've made dozens, if not hundreds of times.

The reassuring familiarity of dishes that can be done without thinking about them makes them a comfort both in the cooking and in the eating of them. Unfortunately, there's just so much that can be said of them without being tedious, which is why there's been less happening on this page than before the lockdown began.

The other consideration in what I choose to cook is the fact that I live with someone who's palate is not, shall we say, as adventurous as mine, whose answer to the question "What would you like for dinner?" is "just something 'regular'"—whatever that means. Since it's just the two of us, I usually translate it as "something simple, comfortable, and as familiar as the back of my hand."

I rather suspect that, among those who actually are cooking a lot, those are the attributes that probably best describe what's coming out of their kitchens. But every now and again, when we've had enough of rote familiarity, and there's an ingredient that has to be cooked that won't bend to "just something regular" treatment, we're blessedly forced out of that culinary lethargy. The results may not be startling or especially noteworthy, but they're always refreshing.

It's times like those when all the practice from that routine cooking serves us well: Having a basic set of well-honed techniques that one doesn't even have to think about helps kick-start the creative process. When we're presented with, say—a couple of zucchini and small piece of uncooked chicken that are about to give up the ghost—knowing how to combine them in a way that stretches the meager-portioned ingredient and gets the most from the least effort and clean-up is a blessing.

After all, being creative and having fun in the kitchen is all very well, but there's nothing fun about spending more time cleaning up after a meal than it took to cook and eat the thing.

Pasta with Chicken and Zucchini

Last night, the refrigerator yielded two small zucchini, a boneless chicken breast (why do they pack them in threes?) and a little over a cup of homemade pizza sauce—all of which were rapidly approaching last call. Rare is the day that I don't have onions, and because it's just the two of us, the pasta supply has held out well. In less than half an hour, a refreshingly different dinner was ready, with only a cook's knife, two pots, two bowls, and a couple of spoons to clean.

If your household is larger, double everything but the butter, only increasing it by 1 tablespoon.

1. Put on 3 quarts of water to boil in a heavy-bottomed 4-6 quart pot over medium-high heat. Scrub the zucchini with a vegetable brush under cold running water. Trim the stem and blossom ends, then cut each crosswise into 3-4 equal lengths. Slice each resulting cylinder lengthwise into ¼-inch-thick rectangles, then cut into ¼-inch-square sticks. Trim and cut the onion in half lengthwise. Lay the halves cut-side-down and cut lengthwise through to the center a about ¼-inch apart, angling the knife toward the center as you make each cut, but don't cut all the way to the root. Cut off the root and and separate it into strips. Slice the chicken across the muscle fibers and then cut each slice into strips roughly the same size as the onion and zucchini.

3. Add the wine and let it boil, stirring to pan to loosen any cooking residue, until it's almost evaporated. Stir in the tomato sauce, bring to a boil, and lower the heat to a steady but gentle simmer. Simmer until the flavors have blended and the vegetables are done to your taste, about 4-5 minutes longer. If it gets a little too thick, thin it with water as needed. Turn off the heat.

4. When the pot of water is boiling, slowly add a small handful of salt and stir in the pasta. Cook, stirring occasionally, until al dente or done to your taste, using the package's suggested cooking time as a rough guide. When it's almost done, gently reheat the sauce over medium low heat. Stir in the chicken and let it heat through, then turn off the heat. When the pasta is ready, reserve about ¼ cup of the cooking water and Quickly drain it. Add it to the pan with the sauce. toss to coat it, and if it appears dry and isn't coating the pasta as smoothly as you'd like, add a couple of spoonfuls of the reserved cooking water. Serve it from the pan with the cheese passed separately.