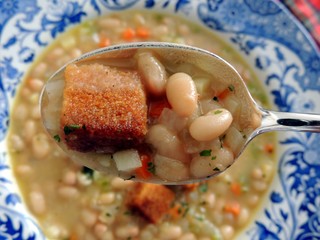 It never pays to get carried away and overthink things in the kitchen.

When the weather finally turns cool, nothing warms and comforts quite as simply or completely as a hearty bean soup. The ingredients are inexpensive, the method is artless and requires next to nothing in the way of skill from the cook, and virtually the only way to mess it up is to walk away from the pot and forget it long enough for it to boil dry.

And yet. When I dug up one of my recipes from an old newspaper column to make a shopping list for a pot of bean soup, instead of finding simple directions for a simple dish involving one pot (as it should be) was confronted with an unnecessarily complicated operation requiring two pots and a layered sautéing step that was supposed to "build" the flavors but in fact didn't contribute enough to those flavors to make it worth the trouble.

It brought on an unpleasant realization that somewhere along the way, I'd lost sight of the elegant simplicity and had overcomplicated the process with what I "knew" of good soup making. And if there's anything in cooking that irritates me almost beyond reason, it's a recipe that over-complicates something that ought to have been simple without a compelling flavor or texture reason for doing so.

The only thing that irritates me more is realizing that the cook responsible for that overdoing was myself.

It was time to step back, reign in my ego, and rediscover the simplicity that makes this soup so appealing. There was just one pot, no fussing, no sautéing. And the result was every bit as good as the soup produced by that "layered" recipe. Sometimes it's nice to be able to putter and fuss over something in the kitchen. But most of the time, the better part of wisdom is knowing when to resist puttering and leave well enough alone.

Most early recipes had nothing more than beans, a few aromatic vegetables, water, salt and sometimes pepper. There wasn't even seasoning meat or meat broth—just the bare essence of good beans enhanced only with the simplest of complimentary flavors.

Most later recipes almost always included "seasoning meat," a hefty piece of salt-cured pork side, fatback, or belly meat, the meaty bone leftover from a cooked ham, or a smoked ham hock. But what that adds is flavor, not extra work: the cook might pick out any lean meat, chop it up, and stir it back into the pot, but beyond that, it's just a matter of putting it all together and giving it just enough attention to keep it from boiling dry.

Though historical recipes outside of Creole New Orleans rarely contained herbs, it won't over-complicate the soup to add a bay leaf or two or a healthy sprig of sage, rosemary, or thyme. If a bolder herbal flavor is wanted, one might go to the extra trouble of picking the leaves from their stalks and giving them a chop before adding them to the pot, but only add them in the last half hour of cooking.

1. Sort the beans, discarding any that are deformed or blemished, and put them in a colander. Rinse them under cold running water, drain well, and put them into a large, heavy-bottomed 6-quart pot. Add enough water to cover them by 2 inches. Modern food science says there is no reason to presoak beans, but a lot actually depends both on the type of bean and how long they've been stored. I find that presoaking does help keep the skins from splitting quite as much. Leave them to soak overnight or for at least 8 hours.

[Note: To do a quick-soak, which considerably speeds up the process and helps keep the skins from splitting, put the pot over medium heat and slowly bring it to a boil. Let it boil one minute and turn off heat. Leave it for an hour, or until the beans are doubled in bulk.]

2. Add 1 quart of water to the beans and bring them to a simmer over medium heat. While it's coming to a simmer, also fill a teakettle, bring it to a boil, then adjust the heat under it to a simmer. When the beans are beginning to boil, adjust the heat to medium low and simmer until they're about half done (beginning to get soft but still a bit crunchy) about 30 minutes. Bring the liquid back to its original level with simmering water.

3. If you're using seasoning meat, add it to the pot, lightly season with salt, and raise the heat until it comes back to a simmer. Again adjust the heat to medium low and simmer gently until the beans are almost tender (about 30 minutes more), then add the onion, carrots, celery, parsnips, and turnips. Bring it back to a simmer, and gently cook until the beans and vegetables are all very tender, about 20-30 minutes more.

4. Most historical recipes called for the beans to be forced through a wire-mesh sieve for a fairly smooth puree, but it's more interesting if only enough beans are pureed to lightly thicken it. You can partially puree it in the pot with a stick blender or just mash enough beans against the side of the pot with the back of the spoon to thicken it to your taste. If you want the thickening to be really smooth, put a cup of beans in the jar of a blender or food processor work bowl, add some of the liquid, and process it to a puree, then stir it back into the pot.

5. Whether you've thickened it or not, if at any point the soup begins to get too thick, thin it with a little more simmering water as needed. Taste and adjust the seasonings and let it cook 2-3 minutes longer. Ladle it out into heated bowls. Sprinkle each with a little parsley and serve with croutons passed separately.

6. Like most hearty soups, this can be made ahead. Remove it from the heat, let it cool completely, then cover and refrigerate it. Reheat it gently over medium-low heat, stirring often and thinning it as needed with water. Taste and adjust salt and pepper and simmer 2 minutes, then serve as in step 4.

Homemade croutons make any soup special and give the impression that you've gone to a lot more trouble than you actually have, because they're so easy to make. Historically, the croutons were cut from slices of bread slathered with butter and toasted in a skillet, but this is easier, takes less of the cook's attention, and makes crispier croutons.

2. Put the butter or oil in a rimmed baking sheet or sheet cake pan and put it in the oven until it's hot but not smoking. Add the bread, toss well to coat it with fat, and bake, stirring occasionally, until they're uniformly golden brown and crisp, about 30 minutes. If you used olive oil, you may if liked lightly salt them.