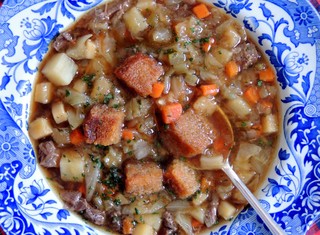 Last weekend, more than sixty members of my high school class gathered in the cool of a rainy upstate Carolina evening to celebrate the anniversary our graduation into adulthood. It was a welcome refreshment of the spirit, not only in the renewing of old friendships, but in the taste of distinctly autumnal weather afforded those of us who now live away from those hills.

The respite from our lowcountry heat made it easy to get into a fall mindset for the research and development of seasonal stew recipes for my regular newspaper column. But a bonus was that the combinations of flavors that came to the fore inevitably brought me back to a favorite recipe from a favorite kitchen of the past: Beef Soup Monticello.

This lovely mélange of fall roots in beef broth was a happy surprise when we were putting together Dining at Monticello, a collection of recipes that could be documented as having been used at Mr. Jefferson's mountaintop home during his lifetime. Its ingredients were few and aside from a classic French broth technique, its execution was artlessly simple.

But like so many things in cooking, it's in that very simplicity that its strength lies. The flavors of each ingredient are allowed to remain distinct and yet their union is exquisitely balanced. It has since been a favorite in my own kitchen ever since, surpassed in nostalgic appeal only by my grandmother's vegetable soup.

Vegetable beef soups were common in Jefferson's day and this one was by no means original to Monticello, but it was so beloved by his family that it always went by that name whenever it appeared in the family manuscripts.

Soups of this kind are almost always better when made a day ahead. They can then be chilled overnight, allowing the fat to solidify so it can easily be lifted right off the top, thereby relieving the cook of the tedium of degreasing a hot soup. But there's a flavor bonus as well, as soups of this kind are always better the second day, when their flavor have had a chance to mellow.

This simple soup is lovely as it is, but like any good mixed vegetable soup, it can be added to without doing it a bit of harm. And as for "historical accuracy," that only matters in the academic world: Mr. Jefferson and his progeny aren't here to know that you've fiddled around with it, and anyway, never take any recipe so literally that you're afraid to adjust it to suit our own tastes.

Add a cup or so of a favorite vegetable, chopped tomatoes, and if you like a starchy element, add about 2 cups of diced potatoes or quarter-cup of pearled barley when you add the celery, or a cup (uncooked) of fine egg noodles or small soup pasta, added in the last 4-10 minutes of cooking or cooked separately in boiling salted water and stirred into each portion at serving.

Adapted from Dining at Monticello: In Good Taste and Abundance (Thomas Jefferson Foundation/2005).

3 pounds beef shanks, marrow removed for another use

2 large sprigs each parsley and thyme, tied in a bundle with twine

1. Put the butter in a large, heavy-bottomed 6-8 quart pot over medium-low heat. Add the shank and season it lightly with salt and pepper. Add the herb bundle and scatter the onion over top. Reduce heat to lowest possible setting, loosely cover, and simmer until the juices are fully extracted from the beef and onion and have reduced to a glaze, about 2 hours.

2. Add the water, raise the heat to medium, and bring to a simmer, skimming off scum and foam as it rises. Add the carrots, turnips, parsnips, and cabbage, bring it back to a simmer, skimming as needed, and adjust the heat to medium low. Simmer gently until the meat and vegetables are very tender, about 2 hours, and the broth is reduced by about one-third, adding the celery after about 1½ hours.

3. Remove and the discard herbs, remove shanks, let cool enough to handle, then remove the bones and cut the meat into bite-sized pieces. Cover and refrigerate the beef until you're ready to finish the soup. If making it ahead, let the soup cool, cover, and refrigerate until fat has settled on top and solidified, about 4 hours or overnight, then lift off and discard fat. If you're finishing it the same day, let it settle and then skim off the fat with a large spoon.

4. When you're ready to serve the soup, return meat to it, bring it back to a simmer over medium heat, and simmer until thoroughly heated, about 5-10 minutes. Ladle soup into heated bowls and serve with croutons passed separately.

Homemade croutons make any soup special and give the impression that you've gone to a lot more trouble than you actually have, because they're so easy to make.

Yes, they're a simple carbohydrate and are toasted with fat, but for heaven's sake, you're not eating them like popcorn and their buttery richness makes even the leanest soup taste indulgent.

1. Position rack in upper third of oven and preheat to 275° F. Cut bread into ½-inch dice and set aside.

2. Put butter or oil in rimmed baking sheet or sheet cake pan and put into oven until butter is melted or oil is hot but not smoking. Add bread, toss to coat, and bake, checking and stirring occasionally, until uniformly golden brown and crisp, about 30 minutes. If olive oil was used, if liked croutons can be lightly salted to taste.