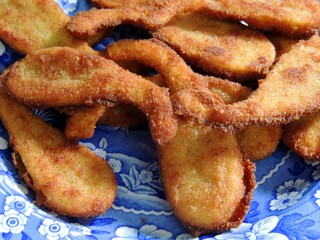 As we settle into summer and try to acclimate to the heat and cope with it in the kitchen, we often overlook a cooking method that's ideal for hot weather, and that's frying.

Yes, it involves boiling hot fat which can be messy and smelly, but it's also one of the quickest and tastiest way to prepare summer's produce. While the heat is intense, it's brief, and because it's fast, the flavors and textures are better preserved. And there's an added bonus in that it gives the food a flavorful caramelized, crackling-crisp surface.

When frying is done properly, the mess is no worse than any other way of cooking and the fat stays where it belongs—on the outside, so the finished product isn't heavy or greasy.

If you're envisioning a bulky, steaming deep-fryer or large, heavy pot half-filled with seething grease, get past it. Deep fat isn't the only medium for frying, and while it's more economical and less of a production than most people think, it isn't always practical for a home kitchen.

Pan-frying, on the other hand, is far more practical, and is the time honored way of cooking Southern fried chicken, vegetables, small fish, and quick-cooking meat like pork tenderloin. It requires no special equipment and only a fraction of the fat necessary for deep-frying. All that's needed is a deep, heavy-bottomed skillet, foil or inverted cake pans to protect the surrounding surfaces from splatters, a frying skimmer or tongs (or even a slotted spoon), and, depending on what's being cooked, as little as a mere quarter-of-an-inch of fat.

The one disadvantage to pan-frying is that because the fat is shallow, a frying thermometer can't be used to monitor the temperature, so doing it well takes a little practice and a bit more of the cook's attention, although only a bit. If you're a gadget-loving cook and have deep pockets, you can invest in an infrared surface-reading thermometer, but once you know how to read the signals that the pan, fat, and food will give you, you really won't need it.

Here's a nice little recipe that's simple and great practice for beginner fryers. There are two key secrets to success in pan-frying squash: they should be very fresh and still quite young (leave the more mature ones for the stewing pot), and the breading should always be given time to set before it meets with the hot fat.

Instant blending flour in a shaker

Lard or peanut or canola oil, for frying

1. Position a rack in the upper third of the oven and preheat it to 150°-175° F. (or the warm setting). Fit a wire cooling rack into a rimmed baking sheet. Gently scrub the squash under cold running water to remove any dirt or grit that may be clinging to them, drain, then trim the stem and blossom ends. Slice them lengthwise about ¼-inch thick. Sprinkle both sides lightly with salt and stack them in a colander set in the sink. Let them drain for 15 minutes, then pat them dry.

2. Spread the crumbs in a wide shallow bowl and have the eggs in second wide, shallow bowl. Sprinkle a large sheet of wax paper or a flexible cutting board with the flour. Spread the squash over the paper in one layer and dust them with flour. Turn and dust the second side.

3. One at a time, lift each piece, shake off the excess flour, and dip it in the egg on both sides. Lift it out and let the excess flow back into the bowl, then drop it into the crumbs, turning it over and pressing the crumbs into it until all sides are coated. Remove it to a clean, dry plate and repeat with the remaining squash. Let them rest at least 15 minutes to set the breading.

4. Put enough fat in a wide, heavy-bottomed skillet to come up the sides by ¼-inch. Warm it over medium high heat until it's hot but not smoking. Dip the edge of a piece of squash or the tip of a wooden spoon handle (not bamboo) in the fat: It'll have a lively bubble around its edges when the fat is ready. Slip in enough squash to fill the pan with a little space around each and fry until bottoms are golden brown, about 2 minutes.

5. Carefully turn and let other the side brown. Remove them with tongs or a frying skimmer, holding them over pan until fat no longer drips, and lay them on the prepared rack. Keep them in the warm oven while the remaining squash cook.

6. When all the squash is fried, transfer it to a warm platter in one layer. Never crowd or stack them or they'll get soggy. Lightly sprinkle them with salt and pepper and serve them at once.