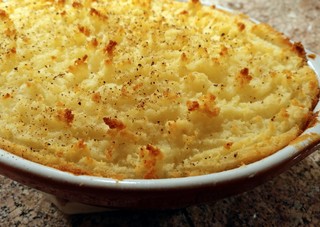 But before wood burning iron cookstoves and later, gas and electric ranges replaced the open hearth in the kitchen, that was called a “roasted potato,” which for us today usually means potatoes that are cut up, tossed with oil, and baked at a high temperature.

What those early cooks knew as “baked potatoes” was a delightful dish of potatoes that were boiled and mashed, mixed with butter, milk or cream, and sometimes beaten eggs, then seasoned with salt and pepper and put into a buttered casserole dish to be baked until golden brown.

Whenever I’m making mashed potatoes, I always make enough to have leftovers for baking the old way. My family actually likes it better than plain mashed potatoes.

Most older recipes for this, including my own in my first cookbook, Classical Southern Cooking, contained beaten eggs, but we prefer it without them. If you’re making it, as I usually do, with leftover mashed potatoes, you’ll only need enough butter to grease the baking dish and will not need additional milk and salt.

I usually just store the leftovers in the buttered casserole so that they’re ready for the oven: just butter the dish, press them into it and smooth the top, then cover it with plastic wrap and refrigerate it until half an hour before I’m ready to bake them.

1. If you’re making the potatoes from scratch, bring enough water to cover the whole potatoes to a boil over high heat. Scrub the potatoes but leave them whole. When the water is boiling, slip the potatoes into it and let it come back to a boil. Adjust the heat to a lively simmer and cook until they’re easily pierced. Drain and cool them enough to handle, then peel them, cut them into chunks and put them through a potato ricer back into the pot in which they cooked. Over low heat, add the butter and work mix it in with a potato masher, then gradually stir in milk until they’re smooth and the consistency you like. Season with salt to taste and stir it in.

2. Lightly butter a 2 quart gratin dish, scoop the potatoes into it, pressing them into the edges, and smooth the top. They can be made several hours ahead to this point or even made a day ahead (cover and refrigerate the dish if so.