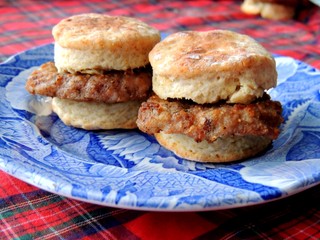 Some of my very best childhood memories are tied to the cool, crisp days of autumn—and not merely because it happens to be the time of year when I was born. There’s something about the cool, clear air, golden light, and rituals of the season that are always renewing and reassuring.

One ritual of autumn that has been nearly lost to us all is the annual hog killing day. I confess to having only a vague memory of those days from when we lived in Grassy Pond, a little farming community outside Gaffney, South Carolina. But the memories that have been passed down by my mother and her parents have been told and retold until they’re almost as vivid as if I’d been right there beside them, scraping down the scalded hides and rubbing salt into the hams.

Because pork is more perishable than other meat, before there was refrigeration, hogs could only be butchered in cold weather. Even then, the meat had to be processed right away, so there was a lot to be done as soon as that hog had been bled, gutted, scalded, and scraped clean. There were hams to be dressed and rubbed with salt, other cuts were either submerged in brine or layered in a barrel with salt.

The organ meats were never wasted. The intestines had to be cleaned for chitterlings and sausage casings. The liver and some other organs were cooked down for liver pudding, sous meat, and sausages. The head had to be cooked down for a surprisingly delicate gelatin-set pâté known ignobly as “head cheese.” Even the brain was cooked and canned to later be fried for breakfast or shaped into croquettes.

Occasionally, a luxury cut was set aside for cooking right away—a whole loin, a ham, or the pair of tenderloins (those lean, straps that are the same cut as a beef tenderloin or venison back-strap).

Nowadays, those tenderloins have become so commonplace that we rather take them for granted, but there are only two to a pig, and in those days, they were a rare luxury. On hog-killing-day, they often became a breakfast treat reward for all the hard work.

They were trimmed of their membrane and silverskin, sliced crosswise into medallions (the old cookbooks called them steaks), beaten out with a mallet or rolling pin, or rolled flat with the pin, and seasoned with salt, pepper, and, often, rubbed sage. They could be rolled in flour or not, and were quickly pan-fried and stuffed into steaming-hot, freshly-baked buttermilk biscuits.

They might also be finished with pan gravy as in the optional step given below, then stuffed into the biscuits or served in the same way that grillades are, with grits or rice, and might also be accompanied by fried apples or sweet potatoes.

If you’re afraid of lard or really must avoid it, olive oil may seem unorthodox but is a legitimate substitution. In Mrs. Hill’s New Cook Book (1867), Annabella Hill followed Dr. Kitchiner’s suggestion of using olive oil to baste roast pork, so it was consistent with the intent of her kitchen. I often use it, partly because I don’t always have good lard on hand, but mainly because I’m lazy and the olive oil bottle is always right by the stove.

Some like a dollop of chutney or fig preserves added to each biscuit.


1. Trim the tenderloin of membrane and excess fat and remove the silverskin. Pat it dry with a paper towel and cut it crosswise into ½-inch-thick medallions. Lay them between sheets of plastic wrap or wax paper on a sturdy work surface and lightly beat them out to a little less than ¼-inch thick. Season well on all sides with sage, salt, and pepper.

2. Heat enough lard or oil in a large cast iron skillet to film the bottom over medium-high heat. When the fat is hot (an edge of the meat should sizzle when dipped into it) quickly roll the pork medallions in the flour, shake off the excess, and slip them into the pan. Fry them quickly, turning several times, until they’re browned and just cooked through, about 3-4 minutes altogether. Take care not to overcook them.

3. Take them up to a warm serving platter. If you’re not making gravy, turn off the heat and skip to step 4. If you are making gravy, pour off all but a tablespoon of fat. Sprinkle the flour into the pan and let it brown over medium heat, stirring constantly. Gradually add the water or broth, stirring and scraping constantly, and let it come to a boil. Taste and season as needed with salt, pepper, and a pinch or so of sage. Reduce the heat to a simmer and cook, stirring often, until thick, about 5 minutes. Return the pork to the pan and let it warm, turning it in the gravy several times, then remove the pan from the heat.

4. While the biscuits are hot, split them in half by tearing them open. Fill each with a tenderloin medallion either with or without gravy. Serve immediately, while piping hot.

The shoulders were used for bacon and were salted and/or smoked. I remember my grandmother and my mother cooking the fat and skin to render the lard and make cracklings. Cracklings were snacks but Mom also made crackling bread. Sausage patties were fried and packed into quart canning jars; fat from the frying was poured over the patties and the jars were sealed.

Joberta, I'm assuming you're using "bacon" in the old way, when it meant cured pork in general. I should have mentioned the lard rendering and cracklings. Crackling cornbread is still one of my favorite things in the whole world! Thank you so much for reading and sharing!