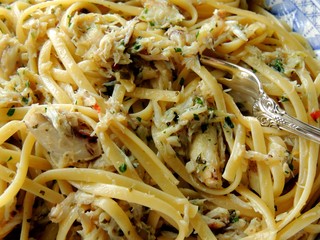 There are far too many cooks who believe that a knowledge of culinary history and of the traditions of a given cuisine is a culinary straight jacket, that to be truly creative is to abandon the past and its structure, throw caution to the wind, and let your creative juices flow. But actually the opposite is true. In cooking, when there’s no grounding structure, the results are rarely memorable and all too often look less like a burst of creative magic than a train wreck.

Contrary to this notion, a firm grasp of basic the culinary principles and flavor profiles of a tradition actually lends more freedom than less to be creative in a meaningful and lasting way.

It’s more than just a mastery of technique; that’s part of it, but it also involves an understanding of why the technique is applied to a particular dish or ingredient, and why certain flavor pairings are traditional—because they’re proven and logical. Once a cook has a firm grasp of those things, instead of hindering creativity, it actually helps it along. One no longer needs a recipe because one knows what will work and—even more important—what won’t.

Yesterday, while sorting through the refrigerator for lunch, I came across the remains of a container of picked crabmeat leftover from making crab cakes. It really needed to be used up or it was going to have to be tossed. A quick sweep of the kitchen gave up hot peppers from the plants on my back stoop, my ever-present vase of parsley, the bottle of extra-dry vermouth that’s a permanent fixture by my stove, and part of a box of linguine.

I’ve had worse collections of raw material to work with. There was no need for a recipe because those ingredients were what most any cook along the coast of Italy would put into a sauce that contained fish or shellfish, and I knew the basic techniques they’d use for bringing it all together.

I also knew what to ignore: aside from the things mentioned above, there was also heavy cream, Parmigiano-Reggiano, cheddar, rosemary, gingerroot, zucchini squash—all of which might’ve been used with crabmeat if it wasn’t going to sauce linguine. But any one of them would only have added heaviness or confusion—or both.

At any rate, in less time than it took the water to cook that linguine to come to a boil, a bit of leftover crabmeat had become a fresh, lovely sauce that tasted both new and as old as time.

And all because it had the structure of history and tradition to support it.

1. Pick over the crabmeat for bits of shell, being careful not to break it up any more than necessary. Bring 4 quarts of water in a 6-quart pot to a rapid boil over high heat.

2. Meanwhile, put the oil and shallot in a small saucepan and sauté over medium high heat until translucent. Add the garlic, parsley, and hot pepper and heat until the garlic is sizzling and fragrant. Stir in the anchovy until it dissolves, then add the wine. Let the wine to boil until it is evaporated by 2/3, then turn off the heat.

3. When the water is boiling, slowly stir in a small handful of salt and the linguine. Cook, stirring occasionally, until it’s al dente (firm to the bite but cooked all the way through and not pasty and raw in the center), using the package suggested cooking time as a rough guide.

4. When the pasta is almost done, reheat the sauce over medium heat, add the crabmeat, and gently stir it several times until the meat is hot through, again breaking up the lumps of meat as little as possible. Taste and correct for salt. When the pasta is done, drain and transfer it to a warm bowl. Add the sauce, toss well, and serve immediately.