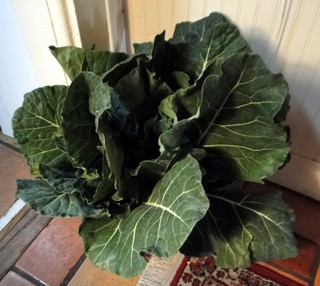 The nicest thing one could say of most of these misbegotten things is that they’re bewildering.

It’s as if the cooks behind the trend believe that the mere presence of collards, grits, and country ham make a dish “Southern” no matter what it is and how it’s made. It’s like presuming that dumping Parmigiano-Reggiano and pancetta into the pot automatically makes the dish Italian, or dark soy sauce and ginger, Chinese.

In other words, most of it’s a lot of silly, stereotype-riddled nonsense. But nonsensical though these things may well be, they do point up the sobering reality that, by and large, few people outside the South (and, I’m sorry to say, a deplorable few within it) have any real idea of what Southern cooking actually is, and still don’t think of it as a legitimately defined cuisine.

A cuisine is much more than its ingredients or even the specific dishes that have traditionally defined it. It’s also more than the singular character imposed by environment—that thing that the French call “terroir.” Those elements are not unimportant, but while they’re essential parts of the equation, they’re not—either individually or collectively—the entire sum.

Beyond those things, there are specific techniques and, possibly the most important of all, a peculiar mind-set about flavor, a logic to the way that those “essential” ingredients are used and in the way their flavors are brought together.

If a cook substitutes collard greens for basil in Pesto alla Genovese, he has not in fact made it into something Southern, even if he’s Southern by birth. What he’s made it into is a misbegotten mess that a Genovese native would consider grounds for justifiable homicide.

In order to survive, everything, even—and perhaps especially—a cuisine, has to adapt and change to adjust to the inevitable changes of the culture of which it is part. Southern cooking can’t be preserved by freezing it in time like a fossil in amber. The cuisine came into being in the first place because cooks were adapting to their surroundings, to the availability of raw materials, and to one another.

In nature, evolution doesn’t happen carelessly. It doesn’t happen carelessly in a kitchen, either. A cuisine will not and cannot evolve and grow through random reinvention that has more to do with self-indulgent novelty than flavor. For its evolution to endure, it has to continue following the same logical patterns and techniques on which it was founded, and be solidly grounded in that unique mindset about flavor.

To do that, of course, one has to know what the patterns and techniques of Southern cooking are, and have a firm understanding of its all-important mindset about flavor. If you don’t have that understanding, then perhaps it’s time you stopped playing around with collard greens and got it.