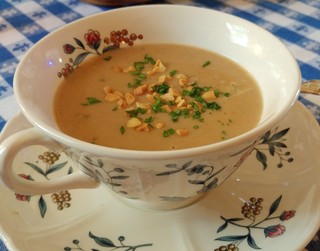 An old New Yorker friend tells me that, until recently, on Tuesday morning after Labor Day the subways smelled heavily of mothballs, regardless of what the weather was like. Since the holiday marked the symbolic if not actual end of summer, summer whites were dutifully put away and fall woolens came out of storage.

Well, it may be the symbolic end of the season, but here in the Deep South, we’re facing another full month or more of summer heat and humidity. Those white shoes may be ceremonially moved to the back of the closet, but other wardrobe changes will have to wait.

All the same, there’s a distinct shortening of the daylight hours and the lengthening of the shadows, bringing subtle changes in the light that inevitably turn our imagination toward fall. At the table, we may not be ready for heavy cold weather fare, but we’re weary of a steady litany of salads and chilled soup and are ready for the mellow flavors of autumn.

Yesterday, I marked that shift with an old fashioned peanut soup. Not so old-fashioned, mind, as the venerable Ground Nut Soup (the old name for peanuts) that Sarah Rutledge recorded in the Carolina Housewife in 1847. Most likely having roots in West Africa, that one was a simple water-based soup thickened with peanuts that had been beaten to a paste with a mortar and pestle and enriched with oysters.

The one I mean came along after the advent of commercial peanut butter in the late nineteenth century. As it became commonplace, it inevitably found its way into things other than two slices of bread. Soup was one of them. Modern is relative: it’s still old-fashioned, having been popular for more than sixty years. It also has a particular connection not to Charleston, but to Virginia.

The recipe that follows is adapted from the 1975 edition of The Williamsburg Cookbook by The Colonial Williamsburg Foundation. There are the usual subtle changes that all cooks bring to the pot, but the two not-so-subtle ones are that I don’t puree the soup through a sieve and add cream to it at the end as the original directed. The soup is smooth enough without pureeing and we like the added texture of the bits of onion and celery. And for our tastes, cream makes this already rich soup a bit heavy, especially when the weather’s not exactly blustery outside.

We mostly have this for lunch with hot rolls and a mixed salad lightly dressed with oil and vinegar, but it could be a first course for a more formal meal. Don’t be tempted to substitute freshly ground or “all natural” peanut butter that separates in the jar. This is one time when you want to use a regular commercial peanut butter, since its emulsifiers help keep the peanut paste suspended and smooth.

2. Whisk in the flour and let it cook for half a minute, then slowly whisk in 4 cups of the broth and bring it to a simmer, stirring constantly. Let it simmer 3-4 minutes, until it has lightly thickened and the flour has lost its pasty raw taste. Whisk in the peanut butter and bring it back to a simmer, stirring almost constantly. Season it with salt and pepper, reduce the heat to low, and let it simmer 3-4 minutes, or until it is thickened and hot through. If it’s too thick, thin it with more broth as needed.

3. Taste and adjust the seasonings and let it simmer half a minute more, then remove it from the heat. Ladle into warmed cream soup cups or soup bowls, garnish with chopped peanuts and parsley, and serve hot.

To serve it cold, transfer it to a sealable storage container, let it cool completely, then refrigerate until well-chilled, at least 2 hours. If needed, thin it as needed with cold water or broth, or whisk in a cup of chilled light cream or half-and-half. Serve in chilled soup cups garnished with chopped peanuts and parsley.