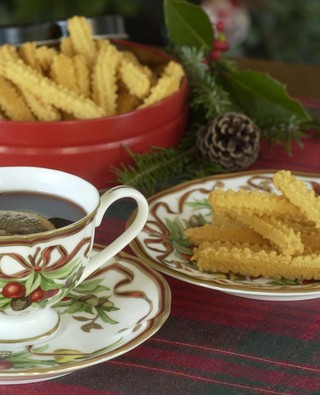 Gifts of food (like this tin of cheese straws) are an indelible part of our holiday traditions that I hope we never abandon. But there are other gifts of food that may be needed (and appreciated) more.

They’re always saying that one can take the boy out of the Baptist Church, but one can never quite take the Baptist out of the boy. I’ve been an Episcopalian all my adult life, but at this time of year, like a Ghost of Christmas Past, my Baptist childhood comes back to me, whispering the name Lottie Moon to my conscience.

For those who don’t know, Charlotte Digges (“Lottie”) Moon, born on December 12, 1840, was a Baptist missionary to China from July of 1873 until December of 1912, when the Mission Board discovered that she was literally starving herself by giving all her money and food to fight the rampant hunger that was surrounding her.

When famine swept through China in 1911, Miss Moon, unable to bear seeing others hungry, began giving away everything she had, including the food from her own table. By the time officials discovered what she was doing, she weighed no more than fifty pounds. Even at her diminutive stature of four-foot-three, she was dangerously underweight and suffering from advanced malnutrition.

Alarmed Mission Board officials removed her from her post, but by then it was too late: On Christmas Eve of 1912, she died on the boat that was bringing her home. She had literally given her own life to feed others.

Long before all that, the Southern Baptist Convention (mainly at Miss Moon’s instigation) had in 1888 established the Women’s Missionary Union, which began collecting an annual offering at Christmas to raise money for missions. In 1918, the Union honored her memory by renaming it The Lottie Moon Christmas Offering For Foreign Missions. The offering has been an indelible part of the season ever since. But her memory is honored well beyond the Baptist Church and its Christmas offering: today (December 22) she’s remembered in the Episcopal Church calendar.

This Christmastide, while we can certainly give to the mission efforts that meant so much to her, there’s another way to honor the memory of a woman who couldn’t bear to see people hungry. Give food. Not the indulgent holiday treats we offer to people who already have plenty, but substantive, nourishing food to people who don’t have enough, without drawing attention to our offering, without judging the reasons they’re hungry, and, most import of all, without worrying whether we’re being victims of lying con artists.

I’m not suggesting we stop giving treats to those we love, so long as they’re a demonstration of caring. And I'm certainly not suggesting that anyone needs to go to the extremes that Miss Moon did. By all means, seek out reputable feeding ministries that put the food where they know it is needed most (the one my own parish participates in is United Ministries of Savannah’s Emmaus House). What I am suggesting is that we take still another step and make it personal: seek out someone close by who is hungry and alone, someone who may feel unloved—even, and perhaps especially—someone who may not be terribly lovable.

What we get back from such giving is far more than can ever be measured.