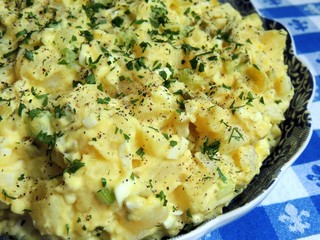 Because it's Independence Day and I'm missing my grandmother more than usual today, tonight's dinner includes the very old-fashioned American-style potato salad that MaMa always made, with celery, sweet onion, sweet pickles, hard-cooked eggs, and mayonnaise (she used Duke's) laced with a little yellow mustard for zip and color.

My grandmother diced the potatoes and then boiled them, but I've always boiled the potatoes whole, in their skins, to preserve their flavor and keep them from being sodden. But lately I've been cutting them up and steaming them instead. The flavor stays more intact than boiling them diced, and I don't have to go through the rather painful ordeal of peeling hot potatoes.

We'll have the salad with pan-broiled sirloin steaks, oven-roasted whole ears of corn, and maybe broccoli to balance the plate with green.

But first, because I'm a Georgia boy and am also missing my grandfather, I'll tuck into my first batch of boiled peanuts.

1. Bring at least an inch of water to a boil into a large, heavy-bottomed pot fitted it with a large steamer insert. Peel and cut the potatoes into 1-inch dice. Put them into the steamer insert, cover, and steam until they’re tender, about 8-10 minutes.

2. Have ready a large mixing bowl. When the potatoes are tender, transfer them to the bowl and while they’re still hot, sprinkle them with vinegar, gently toss, and season well with salt. Gently toss again. Let them cool until just warm.

4. Let the salad finish cooling completely, taste, and adjust the salt, pepper, and mustard. Cover and refrigerate until well-chilled, about 2 hours. Just before serving, garnish with the remaining parsley and a light grinding of black pepper or sprinkle of paprika if you prefer.

I love potato salad. This is the best--close to the way I have always prepared it but with a few new twists.

Thank you, Lydia! I love this one, too. For a number of years I got into making this French-style potato salad that's dressed with oil and vinegar, and had forgotten how much I like this style.