23 May 2017: Of Sautéed Mushrooms and Pimiento Cheese 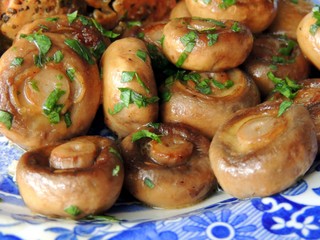 A gray, overcast day, a handful of small button mushrooms left over from styling a newspaper column illustration, a new block of very sharp cheddar, and a small jar of pimientos in the pantry: Probably those things will seem unlikely as an invitation to an afternoon of culinary nostalgia to anyone but me. But there it is.

After all, our tastes in cooking and eating, not to mention the different paths we’ve taken to become the cooks that we are, are unique to us. What those things stirred for me was a set of two seemingly different culinary memories that were part of a common thread. The first was making pimiento cheese with my grandmother in her sunny yellow kitchen, one of the key moments in my education as a cook that I’ve revisited many times and visited yet again later in the afternoon.

The second was an enormous bowl of butter-braised mushrooms on a Sunday buffet.

Our family had gone to Fort Lauderdale to visit my mother’s baby sister, Alice (the racy aunt with bleached blond hair, eye liner, and sleek Pontiac convertible). Back then, Florida wasn’t nearly as cosmopolitan as it is now, but it was certainly much more-so than Grassy Pond community in Gaffney, South Carolina.

My aunt took us to a fancy cafeteria for Sunday lunch, which to my eight-year-old mind was the ultimate in sophistication. As my mother shepherded me through the buffet, we came upon the biggest bowl of button mushrooms I’d ever seen. There must have been at least two gallons of them, golden-brown and glistening with butter, easily the most wondrous, beautiful thing I’d ever seen. Though only eight, I loved mushrooms, and just the sight of them had me literally shaking with excitement.

The server, sure I didn’t know what I was asking for, ignored me until my mother archly told her to give me what I was asking for. She dished them up and passed them under the sneeze guard with a doubtful shake of her head. They probably weren’t the most wonderful mushrooms in the world, but that’s how they seemed at the time. I hungrily scooped up every drop of buttery juice with a spoon.

Let’s face it: I was one strange little boy.

Today at lunchtime, sautéing that handful of little white button mushrooms with a nice lump of good butter brought that childish excitement sharply back to these tired old bones, a keen reminder that we should never let that fresh eagerness fade, either in the kitchen or at the table.

It also brought to mind one of the silliest and most self-important pieces of culinary writing I’ve ever seen, an essay on sautéed mushrooms that concluded with a recipe presumptuously touted as the “ultimate” method for sautéing plain white champignons. Involving at least three different processes (in addition to sautéing), a lid (something else to wash), and almost constant supervision, it turned what ought to have been a simple five-minute process into a forty-five-minute ordeal. Perhaps it made a difference in the final product, but it cannot have made enough of one to have been worth the extra work.

The point is simply this: we should never lose that sense of wonder, that keen, fresh excitement, whether we’re stirring up the millionth batch of something we’ve made all our lives or trying something we’ve never made before. But we should also never get so impressed with our own cleverness that we abandon our common sense.

1. Wipe the mushrooms clean with a dry paper towel and trim their stems even with their caps.

2. Warm the butter or oil and butter over medium heat until the butter is sizzling. Add the mushrooms and quickly toss to coat them with the butter so that it’s evenly absorbed. They’ll soak up most of it, but will let go of it again at the end. Sauté, tossing them often, until they’re beginning to color around the edges of the stem and cap bottom, about 2-3 minutes.

3. Season them with a light sprinkling of salt and continue cooking until they start releasing the butter again, about a minute longer. Turn off the heat, adjust the salt, and toss them one last time. Turn them into a bowl, sprinkle with parsley, and serve immediately.