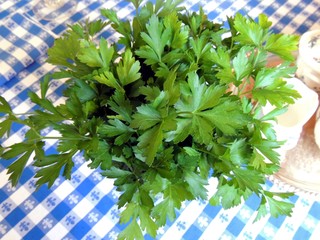 Now, here’s a curious thing that I can’t explain. For reasons that are a complete mystery to me, having a bouquet of fresh parsley in my kitchen is a kind of culinary security blanket. It reassures and comforts me, even when I end up using very little of it in the pots.

Unfortunately, that’s more often the case than not. Despite the truth in the old Italian proverb “essere come il prezzemolo” (literally “to be like parsley,” that is, everywhere), I can rarely use it all up before it starts to fade.

But still, I will have it: I pick over the bundles in the market until I’ve found the freshest and brightest of them. I bring it home, carefully untie and wash it, then drop it into a tumbler of water, and set it in a place where I can look at it while I work. And let out an happy if slightly irrational sigh.

It would make more sense to just grow it and only snip off leaves as needed. And I would, if there was a spot in our yard that drained well and got plenty of sunshine. But the planting beds around this house are all shaded and I’ve never had luck with this herb in a pot. So, that endless cycle of buying it with hope and using it more as an ornament than cooking ingredient continues.

You may be thinking: well, what do you expect—you’re a Southern cook; herbs in general (and parsley in particular) are not traditionally a part of Southern cooking. Ah. But even if that was true (and it isn’t) this odd obsession long predates my exposure to other cuisines such as the Italian cooking that I’ve come to love with equal fervor: it’s been going on since early childhood.

The myth that Southern cooks didn’t (and never had) used fresh herbs until the so-called “gourmet” cooking revolution of the seventies and eighties is just that: a myth that has no basis in reality. All the early Southern cookbook authors, from Thomas Jefferson’s indomitable cousin Mary Randolph through to Georgia’s own Annabella Hill, made wide use of parsley in their books, and included Parsley Sauce as a primary variation on the butter sauce that was practically ubiquitous in the cookery of the ante- and post-bellum South.

My mother grew parsley in our garden, and I well remember sprigs of it adding elegance to dainty ladies’ luncheon plates and Sunday company platters throughout the rural farming community and, later, the small town where I grew up. A sprinkling of its minced leaves often lent color to potato dishes or chicken salad, though, admittedly, it was by then used more as an ornament than flavoring and for a short, sad time, came mostly from a jar of dried parsley.

Funeral Potato Salad
One of the things that I remember almost always containing parsley was fancy potato salad that was destined for the home of a bereaved family.
You see, when somebody dies down South, the bereaved family is immediately swamped with food, and gussied-up potato salad is always one of the staple dishes that’s offered. I neither made the rule nor question it: I’m just glad that somebody did make it, because when grief comes calling, there’s nothing that can comfort quite like a good potato salad. And one of the things that set its flavor apart was the chopped parsley that made it “fancy.”
Most traditional Southern cooks have a “funeral potato salad in his or her repertory. This one is mine. But don’t wait for someone to die to make it: this is perfect for Easter dinner or, for that matter, any other spring or summer celebration.

1. Scrub the potatoes under cold running water and put them into a stockpot with enough water to cover them by an inch. Remove the potatoes, cover the pot, and bring the water to a boil over high heat. Add a small handful of salt and the potatoes. Let it come back to a boil, reduce the heat to medium, and cook until the potatoes are barely tender, about 20 minutes. Exact times will depend on the size and age of the potatoes—some will take long, some less—so keep an eye on the pot and don’t overcook them. Drain and let them sit in the pot until cool enough to handle.

2. Peel and cut the potatoes into large dice and transfer them to a large bowl. Sprinkle generously with vermouth and a pinch or so of salt, gently toss, and let them cool until they’re just warm.

2. Add both kinds of onions, the celery, all but about 2 teaspoons of the parsley, both the black and green olives, the capers, and the hard-cooked eggs. Lightly toss. Lightly whisk together the mayonnaise, mustard, vinegar, and a few liberal grindings of pepper. Add the dressing to the salad and mix well until everything is evenly coated. Let it stand for half an hour, then taste and correct the seasonings. Sprinkle it with the reserved parsley and a little sweet paprika. If you’re not serving it right away, refrigerate until needed but do let it sit at room temperature for half an hour before you serve it.

I think you should not worry too much about not using it all up before you have to toss it out. Think if it like flowers. It's something you enjoy having around, and if it brings you pleasure, then keep bouquets around. You could even rub it every now and then just to smell the fragrance. And, the cost of a bundle of parsley isn't so much to not indulge yourself. I like to do that occasionally with cilantro. I love cilantro but rarely cook with it enough to use it all so I plop it in water, rub it on my hands after cleaning the kitchen, just because I love the smell. If eucalyptus was readily available, and reasonably priced, I'd do the same thing with that as well. Enjoy it!

I know, Rebecca, but still my depression-era parents instilled in me this thing about no wasting food. So it's hard to ignore that little nagging voice! Thank you for the encouragement!

This describes me parsley habits exactly - - or it did till I began to chop it fine and add it to tossed salads. I like the taste of parsley, so this works for me. I'll have to try it in sandwiches, minced, like watercress.
Have you tried Mrs. Meyer's parsley-scented handsoap? I sampled some once, and thought it smelled just like the genuine article.