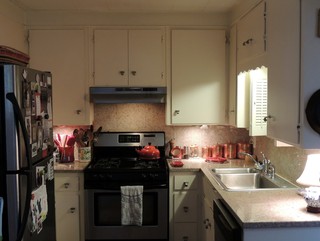 A little bit of love and a lot of cleaning and organizing have made my small, dark kitchen seem new and comfortable.

For nine years, I have hated my kitchen.

People are always surprised to hear it: Somehow, there’s a prevailing notion that all food writers are possessed of dream kitchens—spacious, light, airy, equipped with state-of-the-art appliances and gleaming copper cookware.

And wouldn’t that be nice?

I am blessed to have nice equipment (including gleaming copper), but the kitchen it occupies is rented and not the stuff that my (or anyone else’s) dreams are made of.

Small, low-ceilinged, and window-less (that is, there’s a single tiny window over the sink that looks out onto an enclosed porch with just one tiny window of its own), it has at most five feet of usable counterspace broken up into three small sections. The appliances are stylish: all stainless steel and black enamel, but that only adds to the dimness. The terracotta tile covering the floor is hard on the feet and held together with uneven, unsealed grout that’s impossible to keep clean.

That’s not to say that the room isn’t without its good points: the storage space is surprisingly generous for a rented house; those stylish-looking appliances all work reasonably well and the range is fueled by gas; and under-cabinet lights do help brighten the meager work surfaces.

But it’s a challenge to work in and my temper (already notoriously uneven) wears thin whenever I’m in it. Or rather, it did.

After the kitchenware store and its cooking school closed, I took a step back to deliberately give some much needed time to things that had been neglected over the last decade, particularly my writing career and my home. In between the hours at my desk, I’ve been doing early spring cleaning: clearing the storeroom of rubbish, turning the spare bedroom inside out, repairing or replacing tattered lampshades, finally hanging pictures that have been stacked in the storeroom for nine years.

Last week, it was the poor kitchen’s turn. The catalyst was a set of drab brown dishes from the 1960s that had been passed down to me by my mother and grandmother. We only use a few of them; the rest had been boxed up and tucked into a storage shed that isn’t completely weather- or critter-proof. It was time to rescue them and find a home for them in the kitchen or sell them, and . . . they were my mother’s and grandmother’s: I’m not ready to part with them.

But where to put them? Every space was occupied. Or was it? A quick survey of the situation brought home that the space was not being used to its best advantage. I cleared out, cleaned, and reorganized the pantry, cabinets, and countertops, cleaned and dusted, swept and mopped. Not only did I make space for every single one of those dishes, I managed to clear places for things that had been previously eating up precious counter space.

It’s not perfect, but it’s neat and clean and there’s now at least six feet of usable counter space. You mightn’t think it, but gaining a mere twelve to fourteen inches of clear countertop made a lot of difference. I surveyed my handiwork, patted myself on the back, and thought . . . this isn’t so bad after all.

Then, that evening, having just seen a local high school production of the musical based on the novel, The Secret Garden, we took the time to watch one of the film versions. If you don’t know the story, a broken, unhappy girl discovers an apparently dead walled garden that had been shut up for a decade; in coaxing that garden back to life, she brings not only herself but her heartbroken guardian uncle and sickly cousin back to life as well.

The point was that all that the garden and the people connected to it had needed was a little love. I walked back into my kitchen, took a look around, and thought: Hmm. Maybe that’s all you’ve needed all along, too. And maybe it was, because working in it feels different now. I’m not saying that I’ve fallen madly in love with it, or that it has suddenly blossomed as the Secret Garden did, but I’m no longer angrily impatient with it.

If you’re wondering what this has to do with cooking (beyond order in the kitchen), think about it for a minute. We can approach cooking, whether it’s everyday routine or company fare—as a tedious chore, or we can put a little love into it. You’d be surprised the difference it can make, not only in our attitude while we’re doing it, but in the finished product as well.

Here’s another funny, pervasive notion about food writers: that our cooking and dining is rarefied and detached, even out of touch, with what average Americans cook and eat on most weeknights. Tuna noodle casserole is a weeknight staple in my house, and was in fact the first thing I made in my newly-ordered kitchen. If you think it’s too plebeian and ordinary, well, all I can say is bless your heart. But if you go to the trouble of tossing in a little love and care, even everyday staples like this will seem special.

1. Position a rack in the center of the oven and preheat it to 375° F. Bring at least 3 quarts water to a rolling boil in a 4-4½-quart pot. Meanwhile, put the butter and onion in a heavy-bottomed, wide, deep pan such as a sauté pan. Put it over medium heat and sauté until the onion is translucent but not colored, about 2 minutes. Add the celery (but not the leaves), and continue until the onion and celery are softened but not colored, about 2-3 minutes.

2. Whisk or stir in the flour and cook until bubbly and smooth. Slowly whisk or stir in the warm milk and bring it to a simmer, stirring constantly. Simmer until the sauce is lightly thickened, still stirring, then season to taste with salt, white pepper, and nutmeg. Stir in the reserved celery leaves. Reduce the heat and simmer 3-4 minutes, or until the seasonings are melded and the flour has lost its pasty, raw taste.

3. While the sauce simmers, stir a small handful of salt into the boiling water and stir in the noodles. Cook until they’re almost tender, about 3-4 minutes, then drain and fold them and the tuna into the sauce. Turn off the heat under the sauce.

4. Butter a 2-quart casserole and turn the noodles and sauce into it. Smooth the top and cover it generously with crushed potato chips. Bake until the chips are golden brown and the center is bubbly, about 35 minutes. Let it rest about 5 minutes before serving.

I'm of to Publix as soon as I'm done reading this and get me some tuna and other ingredients, ooh la la potato chips.

I always love reading your thoughts and memories here, so down to earth! JMHO but that is what makes you the fantastic Chef and person you are! Thanks for sharing...oh and I haven't thought about Grandmama's tuna casserole in years, time to make it!!!

Replaced the cream of mushroom with love. I get what you did there. ;) <3

You've all warmed my heart! Thank you so much for reading and for supporting what I do here!

Thanks Damon. I've been wanting a tuna noodle casserole. This sounds great. Nice write up and I get what you mean about finally doing things neglected.