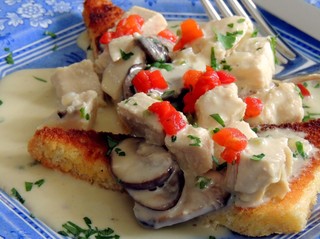 The king, if you’ll pardon the expression, of all this dainty fare was Chicken à la King. Basically creamed chicken with an attitude, it dates back, as so many things of its kind do, to the late nineteenth or early twentieth century, with at least four claims on the credit for its creation.

Unhappily, many of the so-called histories of Chicken à la King that are circulating on the internet are really only myth, legend, and misinformation masquerading as history: at least two sources assert with authority that Fannie Farmer included recipes for it in her 1896 edition of The Boston Cooking-School Cook Book, yet a glance at that edition, which is widely available in facsimile, reveals that she didn’t. Possibly this is a careless misreading of other sources that cite Miss Farmer’s 1906 revised edition of the cookbook and a 1911 publication on catering (sources I have not been able to verify).

In short, they’re popular stories, not histories, and we can’t trust them. The most widely accepted story is that it was created by George Greenwald, Chef de cuisine at the old Brighton Beach Hotel in the Brooklyn oceanside neighborhood of the same name. According an old brochure from the hotel, it was made specially for the proprietor, E. Clark King II, and his wife. The brochure included a recipe, and had all the things that make it plausible: names, dates, places.

But there are several other claims, some predating Greenwald. Chef William King of the Bellevue Hotel in Philadelphia, was supposedly credited with the creation in his obituaries and a couple of editorials after his death in 1915. Another story is that it was created in the 1880s, either at Claridge’s Hotel in London for financier James R. Keene, or at Delmonico’s in New York for Keene’s son, speculating that the name was corrupted as the recipe began to travel. But since most of these tales are not accompanied by documentation, they’re no more reliable than a perforated spoon would be as a soup ladle. Even that Brighton Beach Hotel brochure, which was, after all, an advertisement, is just an historical document, and not a documented history: There’s a difference. That isn’t to say it isn’t true, only to point out that it hasn’t been verified.

But never mind. What we do know for sure is that by the 1920s, Chicken à la King was a fixture in restaurants and tea rooms all over America, and was popular enough with home cooks to turn up in Henrietta Stanley Dull’s classic tome Southern Cooking in 1928. By the 1950s, it was a standard for bridal luncheons, banquets, and of course those ladies’ luncheons at home.

As is true with so many famous dishes, it was this very popularity that proved to be Chicken à la King’s undoing: overused and often badly made, palely imitated by canned and frozen entrées, this once beloved classic had, by the 1970s, been denigrated to a cliché that was no longer taken seriously. It’s too bad, because the original, carefully prepared and not left to languish for hours on a steam table, is actually quite lovely, and deserves better than recent history has given it.

The good news is that it appears to be making a little bit of a comeback. Type “Chicken à la King” into your internet browser and you’ll get dozens of hits. The assortment is dizzying, everything from recipes claimed as the original to canned-cream-soup slow-cooker renditions that would give you hypertension just reading the ingredients list. The bad news is that the levels of quality are equally as varied. The sauce is rarely a true cream sauce and other ingredients have been added, including canned or frozen peas, multicolored bell peppers, carrots, celery, and slivered almonds, none of which were present in the earliest recipes.

There are even variations that replace the chicken with ham, turkey, vegetables, and, of all things, tofu (I couldn’t believe it until I saw it for myself). It would appear that in contemporary American kitchens “à la King” has become more of a concept than a specific thing. Still, we would do well to go back to the older recipes, and rediscover anew what the fuss was all about.

In many old recipes, the base is a true cream sauce that contains no broth at all, in others, a modified velouté-style sauce with broth, cream, and a flour liaison, and a few (including a couple claimed to be the original) are cream sauce lightly thickened with flour and egg yolks. Though originally served over toast or vol-au-vent (puff pastry cups), today it’s also commonly served with rice (one frozen entrée is even packaged with rice) and some serve it over noodles.

This recipe is based mainly on Chef Greenwald’s from the Brighton Beach Hotel, because it was one of the subtlest and most elegant renditions. The main difference is that Greenwald’s sauce was all cream, and I’ve used the combination of broth and cream that was found in later versions, since it makes for a lighter, yet more flavorful sauce.

1. Melt 4 tablespoons of butter in a deep, heavy-bottomed pan over medium heat. Add mushrooms and sauté until beginning to color and any liquid they weep out has evaporated, about 5 minutes. Add the onion and pepper and sauté until softened, about 3-4 minutes.

3. Fold in the chicken and season to taste with salt, pepper, and nutmeg. Simmer, stirring occasionally, until the chicken is hot through. Reduce the heat to the lowest possible level. Whisk together the egg yolks, lemon juice, and 2-3 tablespoons of cream.

4. Make the toast: lightly butter the bread and broil until it’s browned and crisp. Divide it among six warm serving plates. Fold some of the hot sauce into the egg, lemon, and cream, then slowly stir it into the remaining sauce. Let it heat, stirring constantly, until thickened, about 1-2 minutes, keeping the heat very low. Be careful not to let it overheat. Stir in the sherry, let it warm through, and remove it from the heat. You may fold the pimiento into the sauce or use it as garnish.

5. Spoon the chicken over the toast. Sprinkle it with parsley and pimiento (if not already folded into the sauce) and serve at once.