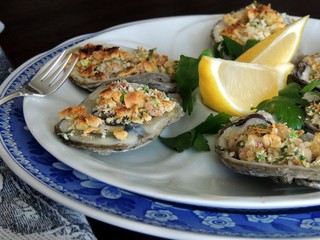 You’d not think so if you were in Savannah today, where temperatures climbed into the eighties, but we’re now into the traditional oyster season, the “cold weather” months (or, around here, just the months with an R in them).

That season’s not as strenuously observed these days, since refrigeration has made it possible to safely harvest, store, and ship oysters in warmer weather. But Savannahians tend to wait for it anyway, since oysters (especially our local cluster variety) tend to be flabby and murky-tasting while spawning, which happens mostly during the summer months, when the waters in which they live are warm.

But in their traditional season, the local oysters from our tidal creeks and riverbeds are crisp and more intensely briny than those from any other part of the country. They’re just about as close to perfect as you’ll get in this life, and local cooks know, when confronted with perfection like that, to leave well enough alone.

In fact, some of our favorite ways of enjoying this shellfish don’t require a recipe. Indeed, one of them doesn’t even involve cooking: just scrub and chill live oysters in their shells, then open and loosen them with an oyster knife, but leave them nestled in their deep bottom half. Arrange them on individual oyster plates or a big, shallow bed of crushed ice. Let each diner season them to taste with a squeeze of lemon juice, jot of hot sauce, or drop of seafood cocktail sauce (or with nothing at all), before turning up the shell to slurp them down.

When we’re either not in the mood for or don’t care for eating them raw, we tend to cook them in one of two ways that aren’t much more involved than that. The first is to roast them over hardwood coals until their shells pop open. The other is to simply blend their strained liquor with 3-4 times as much whole milk or milk and cream, bring it to a simmer, and add the oysters and a lot of butter. Let them stew gently until they plump and their gills curl. Then we season it to taste with salt and freshly milled pepper and dig in.

Unhappily, right now it’s still too hot in Savannah to be outside standing over hot hardwood coals or inside over a stewpot. So if you’re craving oysters and don’t care to slurp them down raw, here’s a lovely old favorite that’s sure to satisfy the craving without giving you a heat stroke.

1. Position a rack 4–6 inches from the heat source and preheat the broiler for 15 minutes. Shuck the oysters and cut them loose from their shell, leaving them in deep halves. Discard the shallow half. Spread ½-inch-thick layer rock salt on rimmed baking sheet or line with crumpled foil. Press oyster shells into salt or foil until level and stable.

2. Mix together the bacon, onion, lemon zest, and crumbs, season it well with pepper, and toss to blend. Sprinkle the bacon-crumb mixture evenly but lightly over the oysters: don’t put it on too thick; it’s meant to enhance flavor, not bury it.

3. Broil until the bacon-crumb topping is golden-brown and the oyster gills are lightly curled, about 4 minutes. Serve at once with lemon wedges.

Note: To mince the bacon without losing your religion, put it in the freezer until it’s very firm, about half an hour, and use sharp ceramic knife. Bacon won’t stick to the ceramic blade quite as much as it does to a steel blade.