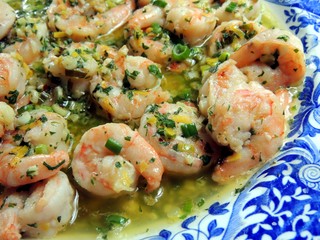 Shrimp Bonnie is equally good served over hoecakes or pasta or even a bed of hot grits.

One of the real joys of teaching is the sharing. It’s more than just showing someone the basics of cooking, but also sharing the subtleties that make a cook into a good one, trading culinary secrets with other teachers and students, and revisiting memories of the people who’ve shaped me into the cook I’ve become.

Unhappily, it’s been a year since my last class. So, a recent class for a group of feisty Southern ladies who gather under the singularly appropriate appellation “Southern Comfort” marked a welcome return of the sharing, trading secrets, and revisiting of memories.

The best memories it brought to fore were of my lovely friend Bonnie Gaster, the fabulous cook who helped me create the appetizer that opened the class.

I’ve lived in Savannah for more than thirty-five years, and Bonnie has been a part of my life for almost all of that time. A native of Tybee Island (Savannah’s beach), she’s a realtor by profession and legendary cook by avocation. What she doesn’t know about cooking fish and shellfish isn’t worth knowing, and she’s who I turn to for wisdom about seafood.

Whenever we get the chance to cook together, which is not as often as it ought to be, something special always happens in the pots. The night that appetizer was created was no exception.

I was working on the food styling and photography for my sixth book, The Savannah Cookbook. Since seafood figures prominently in Savannah’s cooking, the longest and most complex of those styling and photo sessions happened in Bonnie’s Tybee kitchen.

On the eve of that session, we’d already cooked about two bushels of crabs and at least five pounds of shrimp for salad, cocktails, stuffed flounder, and I forget what else. We’d been picking crabmeat for a couple of hours when Bonnie decided it was time to stop and eat.

Aside from all those cooked shrimp, we had a dozen or so lemons, nearly as many bundles of slim little scallions, and enough parsley to carpet the living room floor. So we made a sauce with lemon, garlic, scallions, parsley, and white wine, warmed some cooked shrimp in it, and, because we’re two Southern cooks whose second culinary love is Italy, we tossed it with linguine, then followed it with a nightcap of bourbon.

Okay, maybe we preceded it with bourbon, too. Never mind.

For the Southern Comfort ladies, to keep with the Southern theme, instead of pasta, the shrimp was ladled over little hoecakes. As the first heady bite took me back to that evening in Bonnie’s kitchen, I made myself a promise to get back out there as soon as possible.

Bonnie, get out the bourbon and butter—and in no particular order. I’m heading your way soon.

1. Warm 2 tablespoons of the butter over medium heat in a large skillet. Add the shrimp, raise the heat, and sauté, tossing often, until they almost done. Remove the pan from the heat and spread the shrimp on a platter.

2. Return the pan to medium low heat and add the remaining butter, garlic, and lemon zest. Simmer gently for about 3-4 minutes or until the garlic is softened. Do not let it brown. Add 1/3 of the green onions and continue another 2-3 minutes. Add the wine or vermouth, raise the heat to medium, and simmer until it no longer has a sharp alcoholic aroma. Reduce the heat once again and simmer until it is lightly reduced.

3. Add the remaining onions, parsley, and return the shrimp to the skillet. Season to taste with salt and if you like hot pepper flakes, but keep in mind that too much will smother the sweet taste of the shrimp. Toss until the shrimp are just heated through. Halve the lemon and squeeze in some of its juice. Taste and adjust the seasonings and serve at once over warm Mini Hoecakes.

Over Linguine: To serve it as Bonnie and I first had it, before you start making the sauce, put 4 quarts of water in a 6-quart pot, cover the pot, and bring it to a boil over high heat. When the water’s boiling, before finishing the sauce in step 3, stir in a handful of salt and 12 ounces (¾ of a 1-pound box) of linguine into the water and cook, stirring occasionally, until it’s al dente, using the package suggested cooking time as a rough guide. Start checking for doneness a minute before the suggested time. When they’re ready, lightly drain and toss them with the finished sauce. This should not be served with cheese.

1. Position a rack in the center of the oven, place a large, baking sheet on it, and preheat to 170° F. (the warm setting). Whisk together the meal, soda, and salt in a large mixing bowl. In a separate bowl, beat together the egg and buttermilk. Make a well in the center of the dry ingredients, pour in the liquids, and quickly stir them together. It should be moderately thick but should still pour easily from a spoon: if it doesn’t, add a little more milk.

2. Heat a griddle or wide, shallow skillet over medium heat, or bring an electric griddle to 325° F. It should be hot enough for a drop of water to “dance” on the surface, but not so hot that the batter browns too quickly. Brush the griddle or pan with fat—just enough to coat it evenly. Pour the batter in about a tablespoon-sized portion from the end of a large spoon—enough to pool into cakes about 2 inches in diameter. The edges will sizzle and form lacy air bubbles.

3. Cook until the cakes are golden brown on the bottom, turn, and cook until uniformly golden, about 2 minutes per side. Transfer the cooked hoecakes to the baking sheet in the oven as they are finished and repeat with the remaining batter until it is all cooked. Serve hot.

I'm coming to live with you and eat at your table!

Cooking with Damon thru the years has been a joy and WAY too much fun a few times! Cannot wait for our first May Prawns...get ready Damon and Tim!

Thank you, Bonnie! I'm looking forward to those May Prawns and sharing a kitchen with you again!

Making Shrimp Bonnie for my sister-in-law tonight, who’s recovering from a knee replacement. Rummaged through my implement drawer and found...aha!....what looked like it might be a “bar zester” that I purchased at Kitchen Outfitters some time ago but had never used. Works perfectly!

A bar zester removes the zest in thin julienne strips. Sometimes it had a larger cutter on the side for doing zest curls for drinks as well.