5 September 2016 Wasting Not and Staying Balanced 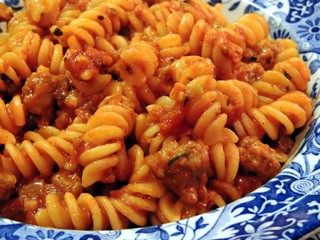 Recipe testing and food styling for my books and newspaper stories almost always leave some interesting leftovers and scraps behind. After finishing a story featuring some of the celebrated pasta dishes from earthquake-devastated Lazio, Marche, and Umbria, there was half a pound of mild Italian sausage, about one-and-a-half cups of tomato puree from a large can of tomatoes, and barely 2 ounces of pecorino romano cheese in the refrigerator.

All too often, these things get wasted—shoved to the back and forgotten until it’s too late to salvage them. So, when suppertime loomed, even though we’d just had penne alla norcina (the sausage), spaghetti cacio e pepe (the lion’s share of the romano), and bucatini all’amatriciana (the tomatoes), I was conscious of the fact that the people of the towns from which those dishes had come were doing without, and made up my mind that those things wouldn’t go to waste.

One of the benefits of taking the time to master the principles of good cooking in general and of both Southern and Italian cooking in particular, is that one can take a handful of ingredients and, without a recipe in the other hand, make something of them that is logical and true to the cuisine. In a very few minutes, those leftover bits, joined with just a few other things, had become a very nice sauce for the three-quarters-full open box of fusilli that I found in the pantry.

My only misstep was to get a little too heavy-handed with the hot pepper to suit my spouse. I had ignored my nose, which told me that there was enough pepper in the pot, and had followed my tongue because a taste of the undercooked sauce seemed mild. The trouble was that I had tasted too soon: the pepper hadn’t had time to melt into all the tomatoes and distribute itself.

Even with that added pinch-too-much of hot pepper flakes, our bowls were scraped clean and I knew I’d make that sauce again—the next time trusting my nose with the balance.

Fusilli with Sausage and Tomatoes

What I don’t ever trust is my memory, and made notes of what I’d done to make it. As my friend and colleague Martha Nesbit says, I think I wrote my cookbooks for myself, so that when my memory of details failed, I’d have a record to put it back on track.

1. Remove the casings from the sausage and crumble it. Put the butter, oil, and shallot in a heavy-bottomed saucepan or small enameled iron casserole over medium heat. Sauté, tossing often, until golden, about 2 minutes.

2. Add the sausage and brown it, crumbling it further with a fork or spatula. Add the garlic, herbs, hot pepper to taste, a pinch of salt and grinding of black pepper, and toss until fragrant, about half a minute. Add the wine, bring it to a boil, stirring and scraping the bottom of the pan, and let it evaporate until its syrupy. Add the tomatoes, bring to a boil, and adjust the heat to a slow simmer. Simmer 20-25 minutes, or until the tomatoes are very thick. Turn off the heat.

3. Meanwhile, bring 4 quarts water to a rolling boil in a heavy-bottomed pot. Stir in a small handful of salt and the pasta and cook, stirring occasionally, until al dente, using the package directions as a rough guide and beginning to check for doneness about a minute before the suggested cooking time. Drain quickly and immediately toss with the sauce and cheese. Serve at once, with more cheese passes separately.