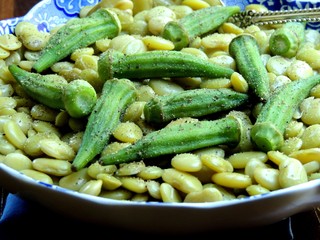 One of the loveliest concepts in all of the South’s summer cooking is the practice of spreading small, baby vegetables on top of a pot of slow-cooked pole beans so that they steam during the last few minutes that the beans are cooking. Most of us have had tiny little new potatoes cooked in this way without knowing that the concept has never been limited to that one thing.

Old-time country cooks also did baby yellow crookneck and cymling (pattypan) squashes, eggplants, baby root vegetables, onions, and whole, immature pods of okra. And the beans that were underneath that variety were not always green beans, but might be mature, shelled legumes, more often than not, the South’s beloved butterbeans.

One of the loveliest of pairings with butterbeans is okra. The simplicity of its subtly melded flavors and contrasting textures is nothing short of pure genius. But the real genius is that it’s accomplished by using two distinctly different cooking methods in a single pot. The beans simmer in liquid until tender, then that liquid is evaporated until the top beans are barely uncovered. The okra is then laid whole on top, covered, and steamed until it’s barely tender but still bright green.

It’s exquisitely simple but, like most simple concepts in the kitchen, it does require a little (though only a little) finesse. The important thing is that its two main ingredients must be impeccably first-rate. Although they won’t have the subtlety of fresh ones, you can make do with good-quality frozen butterbeans. But there’s no compromising with the okra: it must be very fresh and small—each pod no more than 2-3 inches long.

The origins of the idea are lost to time, but whenever okra turns up in the Southern pot, there’s always a suggestion that a cook of African descent had something to do with it.

1. Rinse the beans in a colander under cold running water. Put them in a heavy-bottomed 2-3-quart saucepan and barely cover them with cold water. Bring it to a boil over medium-high heat, skimming off the scum as it rises, then reduce the heat to medium low, loosely cover, and simmer, stirring frequently, until the beans are nearly tender, about 15 to 20 minutes.

2. Meanwhile, wash the okra under cold running water, drain, and trim the stems but leave the caps intact. Uncover, add a healthy pinch of salt, stir, and cook, uncovered, until tender, about 5 minutes more.

3. If the liquid isn’t somewhat reduced, briefly raise the heat to medium high and quickly reduce the cooking liquid until it is beginning to get thick, watching them so that they don’t scorch. Lay the okra on top of the beans, lightly sprinkle them with salt, then cover tightly, reduce the heat to the lowest possible simmer, and steam until the okra is barely tender, about 4 minutes.

4. Turn off the heat and transfer the vegetables to a warm serving bowl. (If you like, you may, as some country cooks do, take up the okra first, putting it on warm plate, then pour the beans into the serving bowl and lay the okra on top.) Dust top with freshly milled pepper, and serve at once.

I grew up eating this delicacy. The okra pods would be so tender and lend such a great flavor to the butterbeans underneath them. Absolutely delicious!!

Thank you so much for reading! I love this, too, and make sure that I have it several times during the summer!

Thank you sounds delicious. After growing okra last year and tasting the amazing flavor (compared to grocery store flavor), I will be doing limas this year - saving this recipe for spring.

Thank you so much for reading! I hope you enjoy this next summer when the fresh things are in!