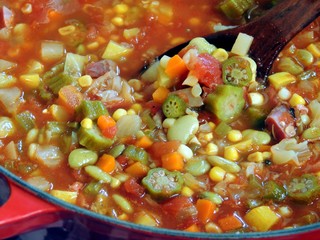 We just never know where a simple pot of soup might take us—or when it will suddenly bring us back.

It’s a funny thing about our tastes (and by that, I don’t mean our perceptions of flavor but our preferences for it): they’re an odd mix of innate likes and dislikes and cultural conditioning.

From the moment we begin to explore flavor as an infant, our tongues and brains make informed decisions that establish our taste preferences, often for life. These have little to do with conditioning other than the filter created by what’s actually in the garden and on the table. While the personal nature of these innate likes and dislikes remains a little mysterious, it’s straightforward: one either likes the fragrance and flavor of mint, or one doesn’t.

But there’s another side to our preferences that’s deeper and far more complex, and that’s the one that’s almost entirely determined by our environment. Bound up in a mixture of culture, terrain, and the unique prejudices of immediate family, these preferences have been conditioned into us to the point that they often have more power over our emotions than those that are determined by our body chemistry.

All this came to mind while assembling a big pot of old-fashioned hambone soup. If you’ve never encountered this homey yet lovely dish, it’s nothing more than a thick vegetable soup consisting of a mélange of seasonal produce simmered in a rich broth made from a leftover hambone. It’s found all over the South (and even beyond it) and the basic idea is straightforward and doesn’t vary from place to place. But the elements that each pot contains do vary, depending on the time of year, on who’s stirring the pot, and on where they’re stirring it.

The one that I was stirring this afternoon was influenced by a complicated blend of many different things: There were the vegetables that my mother routinely grew in her garden; there was a little of the unique okra soup of the Georgia Lowcountry that’s now home; there were taste memories of dozens of other mixed vegetable soups that have stirred my appetite over more than half a century of cooking, from the hearty beef soup of Old Virginia to the minestrones of Liguria and Emilia-Romana.

But its sturdy foundation was deeply and inextricably tied to my childhood in the Carolina hill country, to the heady concoction that my grandmother simply called “soup,” a rich beef and salt-pork broth made thick with lots of tomatoes and a dozen or more vegetables. Though it had elements of hambone soup, it wasn’t really the same thing. Yet, as I stirred, sipped, and adjusted, I suddenly realized that the thing that was guiding my tastes was my grandmother’s soup.

Despite all those flavors and aromas that had beguiled, bewitched, and led my palate to stray down a culinary path that has crossed oceans and continents and flirted with cultures from all over the globe, the core of my tastes had never really left home.

The paradox of a good vegetable soup is that it will be at its best made in the summertime, when all its ingredients are in season and at peak flavor—and when the last thing we want to do is stand over a steaming pot or tuck into hot soup.

As for the former drawback, it really requires very little attention once it’s assembled and simmering, and as for the latter, like most vegetable soups, this one is equally as good served cold (a little less than room temperature, but not fresh from the refrigerator cold). In that way, it makes a welcome cooling lunch or supper even on the most sweltering of summer days.

The first two steps are for making a rich broth with the hambone. Traditionally, the broth was made when it was needed. But for modern cooks, it’s good to know that it can be made well ahead and even frozen in small batches to use as a seasoning broth for many other dishes. If you choose to save the fat from the broth for sautéing, it’ll keep in the refrigerator for up to 2 weeks, up to 3 months if frozen in a well-sealed container. The broth will keep for up to a week, refrigerated, or as long as 3 months frozen in small batches.

For the broth (makes about 3½ quarts):

1. Put the bone or hock, onion, celery, carrot, and water in an 8-10-quart stockpot. Bring slowly to a simmer over medium heat, uncovered, about 30 minutes, skimming off any scum that rises. Add the peppercorns, hot pepper, and herbs, reduce the heat to low, and simmer slowly at least 2 hours; 3 or 4 hours is better if you have the time. (If you have a large enough slow-cooker, you can do this in it and let it simmer overnight. Cook it on high until it starts to boil, about an hour, then turn it to low, add the spices and herbs, and let it simmer 8 hours or overnight.)

2. Turn off the heat. Taste and add salt if it is needed, then let the broth cool. Strain it into a bowl, discarding the solids. If you have time, refrigerate it overnight until the fat on top has solidified and then remove the fat. Otherwise, let it settle a few minutes and then skim off the fat with a wide, shallow spoon. You can discard it or save it to use for sautéing.

3. Warm the drippings or butter and onion in a heavy-bottomed 4-6-quart pot over medium heat. Sauté, stirring often, until it’s translucent but not colored, about 2-3 minutes. Add the carrot, celery, and turnip and sauté until beginning to soften, about 2-3 minutes longer. Add the broth and tomatoes with their juice, bring it to a boil, and lower the heat to a steady simmer. Season lightly with salt and generously with pepper and let it simmer for an hour.

4. Add the butterbeans, corn, squash, cabbage, okra, and ham and raise the heat long enough to bring it back to a boil, stirring often to make sure it doesn’t scorch. Lower the heat once more to a steady simmer and cook until the vegetables are all very tender, about 30-45 minutes. Longer won’t hurt a thing. Taste and adjust a salt and pepper and simmer a moment or two longer.

Hard to beat soup of almost any kind. Veggie is one of my favorites no matter what meat you season with.