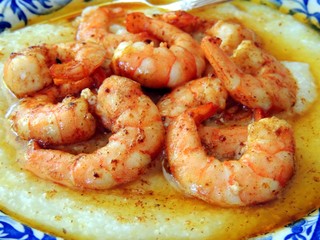 While we were in shrimp territory, we ate as many of them as we could manage. Most of the shrimp we ate were bought from the many local fishermen who sold them roadside from the tailgates of their battered pickups, since we either camped or rented a short-term apartment with a kitchen so that my mother could cook. Her favorite way to prepare them was to simply sauté them for breakfast in copious quantities of butter and then spoon them, butter and all, over a snowy bed of hot grits.

The shrimp were done in less time than it took to scramble an egg, and the butter turned slightly pink and soaked up some of their sweet, delicate flavor. I’ve since had shrimp and grits that came close to equaling it, but never any that could surpass it.

Now, my mother is the undisputed Low-fat Queen of the Universe, but that was one time when she didn’t skimp on the butter, because she knew that our time in shrimp country was all too brief and that the magic conjured in the union of freshly caught shrimp and butter was far too precious and fleeting to be stingy with it.

Some Lowcountry cooks like to make this with leftovers from a party tray, and it’s a beautiful way to rejuvenate them so long as they weren’t overcooked to begin with. If you’re using leftover shrimp, let them sit out of the refrigerator for 30 minutes before cooking them, and only sauté them long enough to heat them through and season the butter, about a minute.

1. Bring a teakettle filled with water to a boil, reduce the heat, and keep it simmering. Bring 4 cups of water to a boil in a heavy-bottomed enameled or stainless steel pan. Slowly whisk in the grits, pouring them in a steady stream, and bring the liquid back to a boil, stirring constantly. Reduce the heat to a steady simmer and cook, stirring occasionally, until the grits are tender and quite thick, about 30-60 minutes, depending on the kind of grits. If they get too thick before they’re tender, add a little of the simmering water. Season to taste with salt and keep them warm.

2. Meanwhile, peel and, if you want, devein the shrimp. (This can also be done the night before: keep them covered in the refrigerator overnight.) Always allow shrimp that have been chilled to sit at room temperature for 30 minutes before cooking so that they cook evenly.

3. Have ready 4 warmed plates. Over medium heat, melt the butter (how much depends on how buttery you want it to be) in a sauté pan or large skillet. While it’s heating, divide the grits among the warm plates. When the butter is bubbling nicely, raise the heat and add the shrimp. Toss until they’re just curled and pink—about 2 minutes, and not an instant longer.

4. Remove the pan from the heat, season them with salt and cayenne to taste. Toss to distribute the seasoning and immediately spoon the shrimp and butter over the grits. Serve at once.