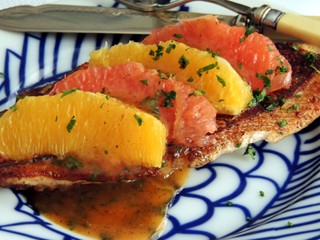 One of the great hallmarks of classic Florida cookery is the pairing of its celebrated citrus and abundant local fish. This was especially true in the old resort towns of the east coast, where the fruit began to come into season just as the wealthy snowbirds arrived to escape the harsh winters of the Northeast and play in the sunshine.

An especially lovely example is Sautéed Fish Fillets Palm Beach, which is really nothing more than an adaptation of a French classic, sole à la meunière (whole or filleted sole sautéed in clarified butter). The twist is a refreshing lift provided by a finish topping of fresh Florida grapefruit and orange sections. It’s the kind of simple, elegant fare that graced the elite tables of Palm Beach in its heyday as a gilded/jazz age resort, and it might well have been served at Whitehall, the serenely elegant mansion that was the winter home of Henry Flagler, the industrialist who built Florida’s east coast railroad and is considered the resort’s founding father.

And yet: I’ve so far not been able to trace it any further than Irma Rombauer’s Joy of Cooking, the classic chronicle of twentieth century American cookery. According to one source, it first appears in the sixth edition, which would have been around 1946. The recipe continued to appear in later editions, including my own well-worn copy of from 1976. But it’s not even mentioned in any of my other Florida sources—notably, the Junior League’s Palm Beach Entertains (1976), Ways with Food (1982), a cookbook from the city’s celebrated culinary maven and hostess Harriet Healy, or the comprehensive late twentieth century culinary chronicle, The Florida Cookbook (1993), by the late Jeanne Voltz and Caroline Stuart.

Well, never mind all that: Its provenance doesn’t really matter at the table. What does matter is that it’s simple to make, elegant in its presentation, and, most important of all, delicious. It’s an especially lovely way to prepare seasonal pompano or, if you can’t get such wonders, snapper fillets. Here’s my own interpretation, in which the pan-gravy (as the Rombauer clan called it) is enriched with a little of the fresh grapefruit juice.

1. Cut the tops and bottoms from the grapefruit and, holding the fruit over a bowl to catch the juice, peel it with a paring knife, cutting all the way through the connective membranes to the inner flesh. With a sharp knife, separate the sections from their membrane and add them to their collected juices. Over a separate bowl, peel and section the orange in the same way and add the sectioned fruit to the bowl with the grapefruit. Set the orange juice aside for another use.

2. Melt the clarified butter in a non-stick pan over medium high heat. Pat the fish fillets dry and season lightly with salt and a liberal grinding of pepper. When the butter is hot, lightly dust both sides with instant flour and slip them into the pan. Fry, turning once, until golden and just cooked through, about 1-2 minutes per side depending on the thickness of the fillets.

3. Remove the fish to a warm platter or serving plates and alternately arrange the grapefruit and orange sections on top, allowing 3-4 per serving.

4. Return the pan to the heat, add the reserved grapefruit juice, stirring and scraping to loosen any cooking residue and bring it to a boil. Let it reduce slightly, then turn off the heat. Stir in half the parsley and whisk in 2-4 tablespoons of cold butter. Pour the sauce over the fish, sprinkle with the remaining parsley, and serve at once.