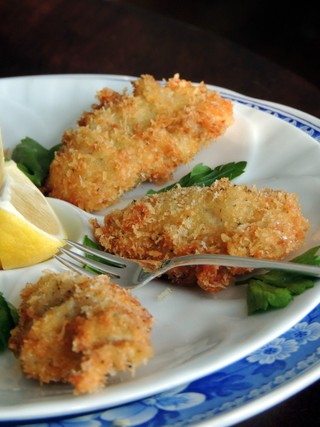 Whenever I get the chance to spend time in good friend Bonnie Gaster’s Tybee Island kitchen (which isn’t often enough) I know that whatever we do will be a lot of fun and the results will taste fabulous. She’s a fabulous cook who does it with the kind of abandon that Julia Child admired and a keen natural palate that always keeps that abandon in good order.

However, when seafood of any kind is in the pot, I know I’ll not only have a good time and eat well, but also learn something. Having grown up with island sand between her toes, Bonnie’s skill with seafood cookery has been made pitch-perfect by a lifetime of practice.

One of the best examples of those skills is her hand at frying oysters. Her fried oysters are pretty much as close to perfect as we ever get in this life. The only other cook I’ve ever known who could equal them is Frank Stitt at The Highlands Bar and Grill in Birmingham. Crackling crisp on the outside, juicy and creamy on the inside and tasting cleanly of the sea, they never heavy or greasy, and have a delicacy that has to be tasted to be fully understood.

They need absolutely nothing other than perhaps a squeeze of lemon juice, but they’re so good that none of the sauces that usually accompany fried seafood, from peppery cocktail sauce to remoulade, get in their way.

There are few times that I don’t trust her implicitly. But. When she announced that she was going to serve those little bites of perfection atop a bed of spicy slow-simmered collard greens, I honestly thought she had gone over the edge and had too much bourbon. Collards and seafood just don’t mix. Or so I thought until the very moment that we tasted them.

Here’s her method for both the oysters and the greens. My own palate does still prefer the oysters and greens separately, but you should try the two of them together: it’s a revelation.

While we no longer have to confine ourselves to months with an “R” in them, savvy seafood cooks understand that oysters are at their best when they’re harvested from cold water, during the time when they’re not spawning. And there’s something about fried oysters and autumn that just seems to go together.

1. About half an hour before serving, pick over the oysters for bits of shell, pour them into a colander set over a bowl, and drain 15 minutes. Mix the Panko and seafood seasoning to taste together in a wide, shallow bowl. Have the egg and flour ready in separate bowls. Fit 2 wire cooling racks into 2 rimmed baking sheets.

2. Half fill a deep fryer or heavy-bottomed Dutch oven with oil. One at a time, lightly roll the oysters in the flour, then dip them into the egg, allowing the excess to flow back into the bowl, then roll them in the seasoned Panko. Lay them on one of the cooling racks and let rest 15 minutes to set the breading. Gently reheat the collards over medium low heat and stir in the vinegar.

3. Heat the oil to 365° F. Fry the oysters in batches until golden brown and floating. It will take no more than 2 minutes or less, so don’t overcook them. Lift the oysters from the fat with a wire frying skimmer and drain them on the second cooling rack.

4. If you’re serving them with the collards, take up about a cup of the collards with a pair of tongs, holding them over the pot until they’re no longer dripping, and mound them in the center of each serving plate. Arrange 5 oysters on over each portion and serve immediately.

Bonnie loves to cook with bourbon and sometimes even puts it in the pot. There is admittedly a lot going on here, but the end result has a lovely balance.

This makes more than the 6 servings you’ll need for the oysters, so you will have leftovers, but that’s never a bad thing with collards: they always improve with reheating. However, if you’re feeding fried oysters with collards to a crowd and have that kind of stamina, you can double the oyster portion of the recipe and easily serve 10-12.

1. Wash and stem the collards. Stack several leaves together, roll them into a tight cylinder, and cut crosswise into 1-inch-wide strips. Melt the butter in a large, heavy-bottomed pot over medium heat. Add the bacon and cook, stirring often, until it has rendered its fat and is browned and crisp. Remove and drain it on paper towels. Add the onions, sprinkle them with about ¼ teaspoon of salt and sauté, tossing often, until they are softened but not browned. Return the bacon to the pot and add the ale, soda, sugar, bourbon, and hot pepper flakes. Let it come to a boil and cook until it’s reduced by one-fourth.

2. Add the collards by handfuls, letting each addition wilt before adding more. Bring to a boil, cover, and reduce the heat to a steady simmer. Cook until the collards are tender. This can take anywhere from 15 to 45 minutes, depending on the youth and freshness of the greens. They can be made ahead to this point: turn off the heat, uncover, and let them cool.

John Martin Taylor’s version of the seafood seasoning that can be found all along the South’s Atlantic coast from Baltimore to Savannah, adapted from his classic Hoppin’ John’s Lowcountry Cooking.

1. Put all the ingredients except the salt into a blender, and process until they are evenly ground. Add the salt and pulse the blender until the salt is evenly mixed with the seasonings.

2. Spoon the spice mix into a 1/2-pint jar, seal tightly, and store away from light, heat, and air.

Note: After making and using a couple of batches, you will know what you like and don’t like, and can balance the blend to suit your own tastes. For example, if you prefer a milder boil, cut back on the cayenne pepper, and add a little sweet paprika for color and a more subtle flavor.

This makes me want to go buy some of the sorry sorry oysters I can get out here in Colorado and give this a try! I've used that breading method for shrimp before- but I always used cornmeal for oysters. I'm also going to try the bourbon greens- but substitute the kale that's overtaking my garden!

Thank you, Mimi! I think you'll find that this perks up even sad, shipped-in-from-God-knows-where oysters! Since collards are actually a variety of kale, the method should work beautifully for any kale. Enjoy!

As always, you post the BEST recipes! I am curious about the greens, and I guess the baking soda helps keep them green. But, I'm still nervous. I'll get over it, because if there is anyone's palate I trust, it's yours.

Rick, coming from you that is such a compliment! Thank you! I was just as uneasy about it, but Bonnie kept saying . . . wait until you taste them, and since I trust her palate implicitly, I did taste them, and she was right!

I can attest to Bonnie's seafood expertise - way back when, we had a little Gaster family get together in Maryland where I had shrimp for the first time. I don't remember anything else about the meal, but I do remember Bonnie's shrimp! My Mom and I talked about them for weeks afterwards. As a 9 year old, I was a pretty picky eater, but those shrimp made an impression! I haven't seen Bonnie in decades, but that memory is a delicious one!

Bonnie's hand with seafood has provided a lot of warm and delicious memories for a lot of people! Thank you so much for sharing yours!

Wow Kat - you hit a memory page from quite a long time ago! I do remember taking tons of shrimp to Ohio and Marylond...you need an excuse to come to Tybee for shrimp, crab and oysters! I am actually testing recipes yesterday and today for my next class October 15 with Damon at Kitchenware Outfitters...