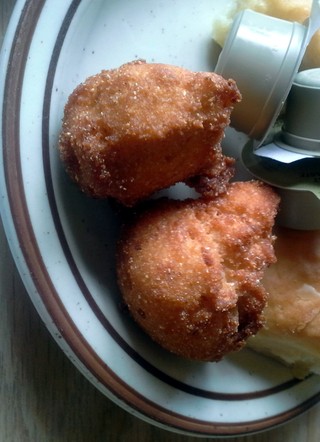 Hushpuppies at King's Barbecue in Petersburg, Virginia: not as light and delicate as my mother's, but does anything measure up to a Southerner's memories of Mama's cooking?

You know you’re south of the Mason Dixon line when there are hushpuppies in the bread basket—even when that basket is on the table of a barbecue joint.

Not that hushpuppies are common fare in barbecue joints: These addictive little morsels of fried cornbread are more usually paired with fried fish. But at King’s Barbecue in Petersburg, Virginia, hushpuppies are served right along with the biscuits. And, honestly, I didn’t think about why they were there as I staved off my appetite while waiting for King's perfect chopped pork by happily munching on hot hushpuppies dipped in tangy barbecue sauce.

What I did think about was how glad I am to live in a place where hushpuppies exist.

In case you don’t know (and if you don’t, I’m so sorry), hushpuppies are cornbread fritters, fried nuggets of cornbread batter, often cooked in the fat leftover from frying fish. Don’t ask me why they’re called “hushpuppies.” There are plenty of stories, but all of them post-date the name by at least a decade and most of them are a bit too pat to be plausible. As best I can tell, the name came into common use sometime during the 1930s—well after the fritters themselves.

But what’s in a name, anyway? It doesn’t matter what they’re called and why: what matters is that they can be one of the most satisfying things in the world—when, that is, they’re well made.

Sad to say, they often aren’t. And even when they are, they can still be leaden and depressing if they’re not eaten straight from the pan while still piping hot. Honestly, there’s nothing better than a hot hushpuppy. And there’s nothing worse than a cold one.

The exception was my mother’s. Faintly scented with onion, feather-light, and crispy even after they’d cooled, they were lovely at any temperature. They were and still are the gold standard by which I’ve measured all other hushpuppies.

For years, it was a standard I myself failed to meet. I’d never helped Mama make them and she’d never written out her recipe. By the time I was trying to reproduce them, she hadn’t made them for years, and had long since forgotten what she’d done that made them so irresistible. After producing more heavy, dense hushpuppies than I care to remember, I almost gave up hope. But then I came across the fresh corn fritters in The Gift of Southern Cooking by the late, great Edna Lewis and her protégé Scott Peacock. The first bite brought back a rush of warm memories, and at once I knew what had been missing: separately beaten egg whites.

If you’re serving these with fried fish, you can of course use some of the fat leftover from cooking the fish, but strain it to get out any bits of breading that have fallen to the bottom and supplement it with some fresh oil so that it can get up to temperature without starting to burn.

1. Whisk together the meal, flour, soda, baking powder and salt in large mixing bowl. Add the scallion and toss until well mixed. Separate the egg, setting the white aside in a glass or metal bowl, and beat the yolk with ¾ cup of buttermilk. Stir this into the dry ingredients, mixing well. It should be about the consistency of thin mush: if it seems too stiff, add more milk by the tablespoonful.

2. In a heavy-bottomed deep pot or deep frying skillet put at least 1 to 2 inches of fat, but no more than halfway up the sides. Place it over medium high heat and heat it to 375° F. Position a rack in the upper third of the oven and preheat the oven to 150-175° F. (the warm setting). Set a wire cooling rack over a rimmed baking sheet and put it in the oven.

3. When the fat is almost ready, whip the egg whites to soft peaks and gently but quickly fold them into the batter. When the fat is up to temperature, drop the batter into it in rounded tablespoonfuls until the pan if full but not crowded. Fry until golden brown, turning once, if necessary. Remove with a wire frying skimmer (not a spatula or slotted spoon), blot briefly on absorbent paper, and transfer to the prepared cooling rack. Hold them in the oven while you fry the remaining batter. Serve piping hot.

Have to make these mouth-watering morsels! Just one egg white, I see it's plural in the directions? Yum and thanks