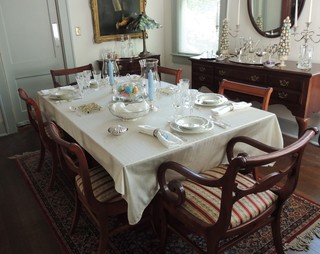 It's not too early to set the table. Our Easter centerpiece for years has been a crystal bowl filled with alabaster eggs: They're always festive, and there's no worry that the flowers won't last or that they'll shed pollen all over the tablecloth.

If you haven’t already planned the menu, do it today. Think about things that not only stand up to being cooked ahead, but actually benefit from it.

The first course: I like to start with a soup because many of them can be made as much as four days ahead, which means that you've got the first part of the meal out of the way so you can concentrate on everything else. If I've got the first course and dessert done already, I feel like I'm home free for the rest of it. There's hardly a puree and clear broth soup that cannot be made ahead, so long as they’re properly cooled and stored right after they’re finished, and then reheated with care.

Purees in fact love being made ahead and there are so many seasonal possibilities: Asparagus, carrot, green pea, and classic leek and potato are actually improved by being made a day or two ahead, and can be served warm or cold. If the finished soup includes milk or cream, don’t add it until your ready to serve, or they could go sour.

Clear Soups (clarified broth that contains dumplings, julienned vegetables, and/or pasta) are ideal for making ahead. You simply have everything done (cook the solids separate from the broth so that it stays crystal clear), cool and store them , and when you're ready to serve, just reheat the broth, add the solid ingredients, and only heat as long as it takes to warm them through. Never let it come to a full boil once the solid ingredients are added or they could make it cloudy.

The Joint: For making ahead, the traditional Easter lamb or ham can’t be topped. They require a minimum of effort, very little last minute attention, and are always festive and impressive. In my house, it’s always lamb, and while I prefer to roast a whole bone-in leg, this year I’ll butterfly it so that it will cook in less than forty-five minutes.

For the green vegetable, I couldn’t imagine Easter without asparagus. While it can’t be cooked ahead, it takes only minutes to prepare, and having one or two last minute elements won’t break your rhythm. If yours is not an asparagus-loving household, then other fresh seasonal possibilities are broccoli, freshly shelled peas or sugar-snaps, or wilted tender young spring greens. Regardless, when simply steamed, they go from plain to sumptuous with nothing more than a toss in melted butter and a sprinkle of seasonal fresh herbs such as chives or thyme.

As much as I love pasta, most of the time potatoes are a better choice for making ahead. Although there is a reason that difficult personality is likened to a cold potato, potato gratins are often actually better reheated than served right after they’re first cooked. And new potatoes can be quickly steamed at the last minute. Just scrub them a day or two ahead and have them ready. Then, peel away a strip skin around their middle but leave them whole, steam them until a knife just pierces through them without resistance, and then just toss them with melted butter, parsley, and freshly milled pepper. Festive, simple, and wonderfully good.

Bread: if you’re a baker and love doing it, by all means you can make your own rolls. They can be made days ahead, slightly under-baked, and frozen. Then all you have to do is pop them in the oven like store-bought brown-and-serve rolls. If you’re not a baker but still want that home-baked smell, then I have just two words for you: Sister Schubert.

Dessert: if I didn’t have chocolate pots-de-crème for dessert at Easter, there would be a mutiny at my table. The version I’ve used for more than two decades is made in a blender and takes all of about 10 minutes. I top it with whipped cream and a couple of seasonal berries or curl of candied orange peel. It can be made ahead, and in fact has to be made at least four hours ahead, but I’ve found that it’s best made no more than three days before hand.

Other make ahead and forget it possibilities include individual baked custards (chill and top with seasonal berry compote), strawberry shortcake (shortcake biscuits or pound cake can be made ahead and frozen and the berries take only a few minutes to pull together), or an old-fashioned banana pudding.