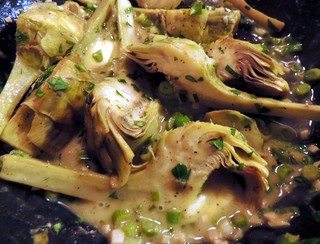 If most people were asked to make a list of typically Southern vegetables, artichokes would probably not even come to mind, let alone make it to the list. And yet, they’ve been growing in the South at least since the beginning of the eighteenth century, and recipes for them were given in a very off-hand way in all the early cookbooks from Mary Randolph through to Annabella Hill. Even Mrs. Dull included a recipe, with detailed directions for eating them, in her definitive 1928 book.

Today they’re an important element of La Cuisine Creole, but elsewhere in the South they tend to be treated as something almost alien, so much so that when I first published Classical Southern Cooking in 1995, we tucked an artichoke in the fruit basket on the original cover and I went around brandishing this thorny vegetable like a club. Today they’re reappearing on Southern tables, but are still treated as something rather exotic.

The simplest and most effortless way (for the cook, at least) to serve artichokes is as all those early books directed: simply to wash them, trim off the dark discoloration, and boil them in well-salted water until tender. The artichoke is presented to each diner whole with a bowl of melted butter, Hollandaise, mayonnaise, or vinaigrette for dipping the leaves. The diner does all the work—and doesn’t mind.

But there are a lot of other ways to prepare this lovely vegetable—and not all of them are French and Italian. One of my own favorites is to braise them as has been done in Creole kitchens for centuries. It concentrates their subtle flavor and makes them meltingly tender without rendering them mushy and dull. Here, they are combined with a little green onion, which adds yet another dimension to their flavor.

The only drawback to cooking artichokes this way is that they will need to be whittled into submission, a job that is admittedly a bit tedious, but it goes quickly once you’ve done it a time or two. You’ll need a lemon cut in half, a sharp chef’s knife, a small paring knife, and a scooping tool, such as a melon baller or a sharp-edged teaspoon.

Cover the work surface with newspaper. Don’t cut off the stem of the artichoke; once peeled, it contains some of the sweetest and most delicate flesh. Pull off the small, tough leaves at the base. Then begin snapping off the large outer leaves by bending them back until they snap. As you go, rub the cut surfaces with the lemon to prevent them from discoloring. After a couple of rows of leaves, you’ll find that they snap further and further away from the base. When this begins, put your thumb against the base of the leaf and pull down the top with your other hand so that the tough outer part strips away from the tender inner flesh. When you begin to see pale green about two-thirds of the way up the inner leaves, cut off the top cone of the leaves with a sharp knife. Rub the cut well with lemon. Now pull back the leaves from the center and scoop out the fuzzy choke with a melon baller or spoon. Squeeze lemon into the cavity and rub it in.

Take a sharp paring knife (I use a tourné knife) and trim off any tough outer leaf parts that remain on the base. Don’t worry that you’re wasting any of it; you’ll be losing very little of that’s edible. Rub all the cut surfaces well with lemon. Then peel the stem, removing the tough stringy skin, and again rub it well with lemon. Set it aside and repeat with the remainder.

If you are preparing a lot of artichokes, or are cutting them into quarters, fill a basin with enough cold water to cover them, squeeze half the lemon into it, and drop in the spent rind. As you finish trimming each, drop it into the acidulated water to keep it from discoloring until you are finished with the others. The artichokes are now ready to use.

1. Half fill a large glass or ceramic bowl with water. Cut the lemon in half and squeeze the juice from one of the halves into the water. Drop in the spent rind. Trim the artichokes and remove the chokes as directed above and cut them into quarters, rubbing them well with the other half of the lemon as you go. Drop them into the lemon water.

2. Trim off the root of the scallions and any withered or discolored greens and thinly slice them, keeping the white and green parts separate.

3. Put 2 tablespoons of the butter into a large, heavy-bottomed, lidded skillet or sauté pan that will hold all the ingredients in one layer and put it over medium-high heat. Thoroughly drain the artichokes and add them to the pan. Sauté, tossing often, until they are bright green and beginning to brown at the edges, about 5 minutes.

4. Season with a healthy pinch of salt, a liberal grinding of black pepper, and add the parsley and the broth or water. Bring to a boil, reduce the heat to low, cover, and braise until the artichokes are tender, about half an hour. If the liquid gets reduced too much, add a few spoonfuls of water, but just enough to prevent scorching. When they’re almost tender, add the white part of the scallions and braise 2-3 minutes longer.

5. Uncover the pan. Raise the heat to medium high and boil away any remaining liquid. Add the green parts of the scallions and the remaining butter, shaking the pan until it is melted and the sauce is lightly thickened. Serve at once.