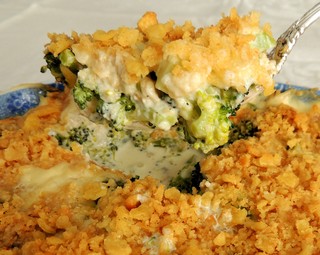 When I began working on my first book, Classical Southern Cooking, broccoli wasn’t thought of as an especially Southern vegetable. But what I found as I delved into the kitchens of our past was a different story. Broccoli had been growing in the South at least since the eighteenth century, and was included in all the old Southern cookbooks, beginning as early as Mary Randolph’s iconic Virginia House-wife in 1824 right through to Mrs. Dull in the twentieth century.

In the South this lovely vegetable enjoys not one, but two prime growing seasons—in both spring and fall. Indeed, in parts of the South it keeps on producing straight through the summer, and in Florida right through the winter. It’s at its best in the seasons on either side of winter, especially in spring when, new and impeccably fresh and sweet, it really needs nothing more than a light steaming, a little salt, and a few drops of lemon juice, if that.

Even so, it’s especially welcome in the winter, and the sturdy, deeply-flavored winter broccoli that we’re getting now lends itself well to the richer fare that we favor when we’re trying to warm our bones.

One such dish is broccoli casserole. In the 1940s and ‘50s, there was a wave of popularity for these, made with the newly available frozen broccoli, canned cream soup, and mild cheddar. They became inordinately popular all over America, but were especially so here in the South, where vegetable casseroles were (and still are) a mainstay of that revered institution, the church covered-dish supper. Fortunately, not all traditional cooks surrendered to convenience.

This fresh gratin harkens back to some of baked vegetable dishes of the late nineteenth century. It owes much to the late Camille Glenn, a lovely caterer and cookbook author who was Kentucky’s premier culinary maven during the latter part of the twentieth century.
Serves 4

1. Lightly butter a 9-inch shallow casserole or gratin dish. Bring at least 1 inch of water to a boil over high heat in a heavy-bottomed pot fitted with a steamer insert. The water should not touch the bottom of the insert. Cut the thick stems from the broccoli and then cut them in half, lengthwise. Cut the tops into sections of two or three florets each, or one if the florets are large.

2. Put the stems in the steamer insert and arrange the florets over them. Cover and steam 2 minutes. Sprinkle generously with salt, cover, and steam until tender but still firm and bright green, about 4–6 minutes longer, depending on the freshness of the broccoli. Rinse it under cold water to arrest the cooking and preserve its bright color.

3. Roughly chop the broccoli, leaving small florets whole, and put it in the prepared casserole. Melt the butter in a small frying pan over medium-low heat. Add the cracker crumbs and toss until they evenly absorb the butter and are lightly toasted. Turn off the heat and sprinkle two-thirds of them over the broccoli.

4. Add a liberal grinding of pepper, the mustard, and half the cheese. Pour the cream over it and gently toss to mix, then gently level the broccoli with a spatula and sprinkle the remaining cheese over it. It can be made up to 4 hours ahead up to this point. Cool, loosely cover, and let it stand at room temperature.