26 January 2015: The Undervalued Virtue of Restraint 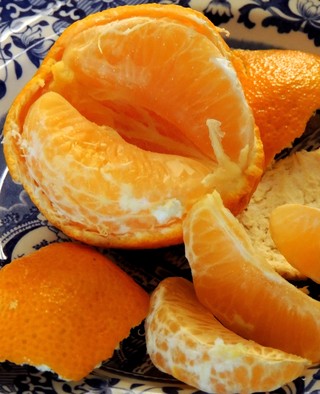 A good cook meets an ingredient in peak condition, such as this perfectly ripened Clementine, with a sense of balance and restraint.

What we don’t add to the pot, Marcella Hazan frequently reminded us, is equally as important as what we do. While under-seasoning can make a dish fall short of its potential, it’s a failing that can still be corrected; there’s rarely any hope for a dish that has been over-seasoned or buried under a confusion of other flavors.

In other words, knowing when to leave something alone is the single most critical element of cooking and eating well. Good cooking, like most things is life, is not an exercise in running amok, prodigally adding one flavor on top of another on top of another until the main ingredient is buried under an explosion of contrasting and often even competing flavors. It’s about bringing the innate flavor of that main ingredient to its fullest potential—and then leaving it alone.

There is nothing wrong with being clever or curious, of course, but the principles of good cooking have less to do with cleverness than with the solid foundation that comes from balance, common sense, and restraint. The latter is, unhappily, a quality that far too many modern cooks have failed to cultivate.

Sometimes the very best food preparation is when we do nothing at all. If you don’t think so, consider the unassuming little Clementine orange. When perfectly ripe, at the peak of fragrance, color, and flavor, the only thing to do is to wash it carefully and present it as is.

There’s something deeply satisfying in peeling this fruit bare-handed, letting the refreshing oils in its thin, loose skin perfume both the air and one’s fingers, heightening the anticipation. Once its segments are uncovered, all that remains is the unparalleled pleasure of sinking one’s teeth into each segment, so that its taut membrane explodes in a burst of sweet, tangy flavor.

There is nothing that could be added that would improve on the experience: not rolling it in sugar, not drizzling it with honey, and certainly not soaking it in wine, caramelizing it in butter, confusing it with herbs, or folding it into custard. Even freezing it in a sorbet would rob it of its most sensuous qualities.

In short, the mark of a good cook is less what you do than what you don’t—even (and sometimes especially) when what you’ve done is nothing at all.