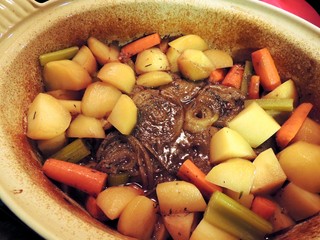 Nothing recalls the Sunday mornings of my childhood quite like the aroma of onions and beef baking slowly in a pot roast.

In those days, Sundays were not a time for lying around: my father is a minister, and it was the busiest day of his week. My mother had to help him prepare for the day, coax three boys out of shorts and into pressed shirts, polished shoes, and neckties, and somehow put together a traditional Southern Sunday dinner for us to sit down to as soon as we got home from church.

More often than not, the main dish of that dinner was this pot roast with onions. We were grown before we knew that the reason Mama made it so often was less because we loved it, than because it was inexpensive, easy, and, surrounded by plenty of carrots, celery, and potatoes, was practically a one-pot meal.

It was also forgiving when the spirit moved Daddy to a sermon that was longer than usual.

There are probably as many different ways of making pot roast as there are cooks, and in nearly half a century of cooking, I’ve made more than my share of all of them. This past week I taught Marcella’s incomparable pot roast braised in Barolo in a cooking class and it may be one of the best I’ve ever made. But when the weather is icy and I am feeling a little homesick, nothing speaks to my heart and soul like this one.

1. Position a rack in the lower third of the oven and preheat it to 300° F. Cover the bottom of a heavy Dutch oven with half the onions. Pat the roast dry with paper towels, season both sides with salt and pepper, and lay it on top of the onions.

2. Sprinkle a few shots of Worcestershire sauce over the roast and cover it with the remaining onions. Arrange the carrots and potatoes around it and season them with salt, pepper, and a few more drops of Worcestershire. Cover and bake in the lower third of the oven until the beef is fork tender, about 3-3½ hours.

3. Turn off the oven and remove the roast. Transfer the meat a warm platter, loosely cover with foil, and let it rest at least 10 minutes before carving. (If making ahead, let it cool, then wrap it well and refrigerate, then for neater carving, slice it while cold and reheat it in the gravy.) Remove the carrots, celery, and potatoes to a warm bowl (I put them in an ovenproof casserole, cover it, and put them back into the oven to stay warm.)

4. Tip the pan and spoon off the excess fat from the roasting juices. Strain them into a saucepan, reserving the onions, and bring them to a simmer over medium heat. Whisk in the butter and flour and simmer, stirring constantly, until thickened, about 4 minutes. Taste and adjust the seasonings and simmer a minute longer to blend the flavors. Turn off the heat and pour the gravy into a warm sauce boat.

5. Remove the bones (if any) and slice the roast thinly, across the grain. Transfer it to a platter, sprinkle the reserved onions over it, and serve with the gravy passed separately. You can also separate it into chunks instead of slicing it. If you have a large enough platter, you can surround the meat with the vegetables, or they can be passed separately.

I think I've died and gone to heaven. This is my Valentine dinner party waiting to happen.

Your Mama's Sunday Pot Roast was the first one of your recipes that I made, Mr. Fowler. It was just the best!