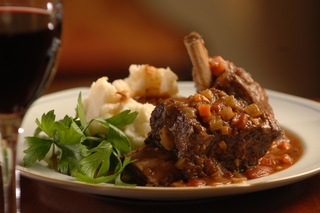 The first days of fall in Savannah were actually almost like fall—cooler, low-humidity, and believe it or not, even a few turning leaves—just enough to really tease the senses and get our palates primed for fall flavors.

This being the Georgia Lowcountry, of course, the weather was soon back to hot and steamy. Now, a tropical storm bringing rain by the gallon is running up against a cold front bringing the cooler temperatures—the perfect weather for indulging an autumnal palate.

It’s just the kind of weather for braised short ribs, and there’s none that can surpass those made by one of my great culinary mentors in Savannah, native son, Walter Dasher.

Though now retired from cooking, in his heyday Walter was named by Gourmet magazine as one the best chefs in the country, and his gifted professional cooking at La Toque, 45 South, and the Chatham Club set a standard that has had a major impact on Savannah’s restaurant culture.

But Walter’s real credentials rest on taste, and there’s nothing that better shows his mastery of flavor and balance as does his port-braised short ribs: simple and heart-warming, yet complex and perfectly balanced. It’s just the thing for a cool rainy autumn evening.

Walter’s advice on the port is to use an inexpensive one: don’t waste a good wine on the braising pot.

1. Position a rack in the center of the oven and preheat to 325° F. Heat the oil and butter in a large, heavy-bottomed flameproof casserole or deep, ovenproof lidded sauté pan over medium high heat. Rub the ribs well with salt and pepper, and thyme. Brown them well on all sides, about 8 minutes (in batches, if necessary—do not crowd the pan). Remove them to a platter and spoon off all but 3 tablespoons of fat.

2. Add the onion, carrot, celery, and leek to the pan. Sauté, tossing frequently, until nicely browned, about 8 to 10 minutes. Add the garlic and ketchup and cook until fragrant and dry, about 3 minutes more. Add the port, stirring and scraping the bottom of the pan, and bring it to a boil. Let it cook until reduced by half, then add the tomatoes and water and bring them to a boil. Return the ribs to the casserole, cover tightly, and transfer it to the oven. Braise gently until the ribs are tender, about 2 hours. After the first 15 minutes, check to make sure that the liquid is barely simmering. If it is bubbling too much, reduce the oven temperature as necessary for a bare simmer.

3. When the ribs are tender, transfer them to a platter and cover loosely with foil. Let the braising liquid stand off the heat for 3 minutes to settle. Skim off the excess fat from the surface, and return the ribs to the sauce or pour it over them. Serve with Celery Root Mashed Potatoes.

Also delicious with roasted or braised poultry and pork. The first time I made it when Walter shared the recipe to include in The Savannah Cookbook, they were so good that they made up our entire supper. When looking for celery root in the market, it should have a fresh, green sprout and its surface should be dry but plump. It should be very heavy in your hand: if it seems light for its size, it’ll be fibrous and dry on the inside and inedible.

1. Scrub the potatoes and celery root well with a vegetable brush under cold running water. Bring enough water to completely cover the potatoes to a boil over medium high heat in a large, heavy-bottomed pot. Add a large pinch of salt and the potatoes. Bring to a boil, reduce the heat to a simmer, and cook until tender, about 30 minutes. Meanwhile, peel and roughly chop the celery root. Put it in a saucepan with enough water to cover, bring to a boil, loosely cover, and reduce the heat to a simmer. Cook until tender, about 30 minutes. It should be the same consistency as the cooked potatoes.

2. Drain the potatoes and, using a hot pad to protect your hands, quickly peel them while they’re hot. Put them through a ricer and add 4 tablespoons of the butter and half the cream. Season well with salt and pepper and mix until smooth.

3. Drain the celery root and put it in a blender with the remaining butter and cream. Purée until smooth, using care, as the puree will be very hot. Lightly season with salt and pepper. Add the celery root puree to the potatoes and mix well. Taste and adjust the seasonings and serve warm.

Recipe and photograph from The Savannah Cookbook (Gibbs-Smith), copyright © 2008 by Damon Lee Fowler, all rights reserved