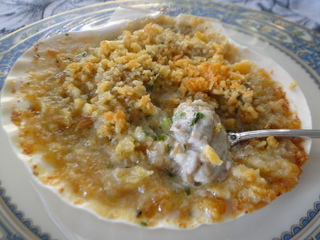 Lucy-Mama's Oysters, finished as Ruth does them in individual scallop shells.

One of the lovely things about Thanksgiving dinner is the way family traditions are perpetuated from generation to generation as we gather around that common table. Even lovelier is the way other traditions get adopted and shared as people come into our family and as we get absorbed into theirs, sometimes through legal ties but more often just because we love one another.

Oysters on the table are one such adopted tradition for me. We lived in the upstate and oysters were expensive. While we always had them on Christmas Eve, they were never on the table at Thanksgiving. But I’ve spent almost my entire adult life in the Georgia Lowcountry, where oysters are to winter feasts what salt and pepper are to others.

Ironically, the oysters that have become a tradition on my table do not come by way of a Lowcountry cook, but my dear friend and colleague Ruth Adams Bronz. They’re from Ruth’s grandmother, a force-of-nature Louisiana matriarch known incongruously to her grandchildren as “Lucy-Mama.” They’re a fixture on Ruth’s Thanksgiving table—a long, narrow hodge-podge of every flat surface in the house, around which as many as thirty-five people have been known to gather.

For another family into which I’ve been lucky to be adopted, the Thanksgiving oysters are from Ramona Bernard, another force-of-nature Southern matriarch from Petersburg, Virginia. What’s interesting to me is how similar the two dishes are: they have almost the same ingredients, and yet their finish, while equally delicious, is very different.

Lucy-Mama’s oysters have the exuberance of Louisiana about them, seasoned with lots of chopped scallion and bound with cream. Ramona’s oysters are more subtle, and are bound with a simple milk and egg custard. Significantly, Lucy-Mama’s recipe was developed with, and is best suited to, Gulf oysters, whereas Ramona’s recipe is ideal for those from Virginia’s Chesapeake Bay.

Maybe you have your own scalloped oyster tradition and don’t dare use either one of these recipes. Or maybe, just maybe, a bit of them will creep into your own. Ramona and Lucy-Mama would love that.

1. Position a rack in the center of the oven and preheat to 350° F. Pour the oysters into a colander set over a bowl and drain at least 15 minutes. Reserve 1/3 cup of the oyster liquor and discard the remainder or pour it into a freezable container and freeze it to use in another recipe.

2. Lightly butter a 9-by-13-inch baking dish and sprinkle ½ cup of the cracker crumbs over the bottom. Spread half each of the oysters, salt, pepper, and butter over the crumbs, top with half the remaining crumbs, and then repeat with the remaining ingredients, finishing with crumbs.

3. Mix together the eggs, milk, Worcestershire sauce, hot sauce, and reserved oyster liquor, stirring until smooth. Pour this over casserole and bake in the center of the oven for 35 minutes or until lightly browned.

I’ve published this recipe before, but you can never have too much of a good thing. It’s all Lucy-Mama’s recipe, but this exact version is adapted from my book Essentials of Southern Cooking.

2. Melt 2/3 of the butter in a large skillet over medium heat until foamy. Add 2/3 of the saltine crumbs and stir until they’re evenly coated. Add the parsley and scallions and toss (it should be quite dry and just beginning to brown). Add the oyster liquid and cream and simmer, stirring often, until reduced by one fourth, watching carefully. Stir in the oysters, Worcestershire, Tabasco, and season well with salt and pepper to taste. Turn off the heat.