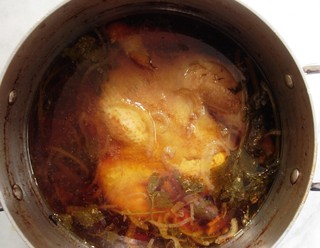 Since I've not yet made my own broth, this is a picture of last year's stockpot. Let's face it: broth isn't terribly photogenic while it's in the making, but at Thanksgiving, it's the difference between a good dinner and a great one.

One of the most essential elements of Thanksgiving dinner, the one on which the rest of the meal rests, is the one that is the most often neglected: the broth. Each year, of the big packaged broth companies hawks its chicken broth with a warm, fuzzy thing about how caring cooks who love the process always rely on packaged broth to boost the flavor of their best dishes.

There’s nothing horrible about packaged broth; it’s a nice thought to imagine that every serious cook has a perpetually simmering stock pot on the back of the stove, but the fact is that almost everyone uses packaged broth at some point. When a process is already finished for you, you have to weigh whether the time savings is worth the negative impact, and sometimes, it is.

But the problem with packaged broth is that it’s produced in mass quantities under minimal human supervision. In short, there’s no little old grandmother standing over that vat tasting it every now and again, which means it will never have the depth of flavor of even a homemade quick broth, and simply can’t offer the underpinning that gives the best flavor to soup, stuffing, gravy, or braised dishes.

A well-made homemade broth on the other hand always has a skilled hand stirring its pot: yours. And making it requires absolutely no skill, precious little effort, and makes all the difference between a good dish and a great one. It also perfumes the house with the most bewitching aroma, making everyone think exactly what you want them to think: that you have been knocking yourself out for days. You can make it this weekend when there’s time for the stockpot to simmer lazily, and have plenty of time to chill and degrease it so that it’s as simple to use as opening that box or can of commercial broth.

Why not let this year be the one in which your great cooking gets all the support it deserves?

1. Put the turkey parts (and hen if you’re using it) in a heavy-bottomed 10-to-12-quart pot, pour the water over them, and warm the pot over very low heat until it is almost simmering and foamy scum begins rising to the top, about 45 minutes. As soon as that scum begins to form, carefully skim it off, and continue doing so until it’s no longer forming. Do not stir the pot.

2. Let it simmer for half an hour. Meanwhile, stick the whole onion with the cloves. Raise the heat to medium and add the onions, carrot, celery, parsley, thyme, bay leaves, peppercorns, and ginger. Sprinkle in about a tablespoon of salt and let it return to a simmer, again carefully skimming off the scum as it rises to the surface.

3. When the liquid returns to a simmer, reduce the heat as low as you can get it and gently simmer, uncovered, for at least 3 hours, checking periodically to make sure it never boils, but simmers very slowly, the steam bubbles not quite breaking the surface. You want to lose about a quart of the liquid—but no more than that, so if the liquid evaporates too much, bring a teakettle of water to a simmer and replenish as needed, then loosely cover the pot. A longer simmer won’t hurt a thing: stockpots in restaurant kitchens are kept going for days. Turn off the heat and let it cool enough to handle.

4. Carefully strain the broth into lidded stainless steel, enameled metal, ceramic, or glass containers, discarding the solids. Let it cool uncovered, then cover tightly and refrigerate. When the fat solidifies on top, remove it. It will keep for at least 5 days. To store it longer, chill, skim off the fat, spoon it into freezable containers, seal, and freeze. It will keep for at least 3 months.

Hi Damon, I have found that roasting turkey wings, necks, and even legs first and then making broth REALLY jacks up the flavor.

I make a lot of chicken broth starting with a box of the prepared and a market roasted chicken. After that much of what I add sounds like your list. I've never used the ginger, but may try that soon. It doesn't take as long as when you start from scratch, and it comes closer to the real thing. Also I live alone and have a problem storing more broth than this process would produce.