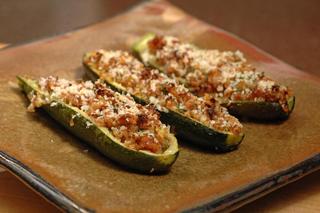 This All-Hallows Day blew into Savannah on wintry winds, bringing with it temperatures in the thirties that have put the final cap onto our lingering post-summer summer.

For those who live in more moderate climates, the Deep South’s summer, especially in our sub-tropical corner, always lingers past September and sometimes even October. That means that while other parts of the country have long since gathered the last of summer’s harvest and prepared the garden for winter, ours are often still producing tomatoes, zucchini, peppers, and even eggplants.

But with cooler weather at hand, we always look for heartier ways of preparing these things for the table. My mother would deal with the bounty by turning the last of the zucchini into what amounts to edible gratin dishes, filling them with the kind of rich flavors that matched the mood of the season—ham, sausage, caramelized onions, spices—and then topped them with cheese for a golden-brown finish.

After I started to study cooking in general and Italian cooking in particular, it was reassuring to learn that my mother’s way of dealing with the late zucchini was almost exactly what a sensible Italian cook does with them, varying from it only in detail and in the material she had on hand. It was yet another example of the innate kinship that I’ve always felt existed between Italian and Southern cooking.

1. Position a rack in the upper third of the oven and preheat to 375° F. Scrub the squash under cold running water. Put them in a wide, lidded pan with enough water to cover. Lift them out, cover the pan, and bring the water to a boil. Slip the zucchini back into the pan, cover, and bring it back to a boil. Reduce the heat and simmer until they’re barely tender, about 10 minutes. Drain and let them cool enough to handle, then split them lengthwise and carefully scoop out their centers, leaving a ¼-inch shell. Roughly chop the pulp.

2. Put the shallot and butter in pan over medium heat. Sauté, tossing occasionally, until the shallots are softened, about 4 minutes, then add the chopped zucchini pulp and cook until the liquid is evaporated. Add the ham and parsley, toss until hot, and turn off the heat. Stir in the crumbs and half the cheese, season well with salt, pepper, and nutmeg, and toss to mix.

3. Fill the hollowed zucchini cavities with the stuffing and put them, stuffing side up, in a lightly buttered casserole. Sprinkle the remaining cheese over their tops and bake until they are hot through and golden brown on top, about 30 minutes.

WOW! Zucchini is so available all year. Great to have a new recipe for it.

Yes, but the ones that are shipped in during the off-season are frequently bland and even a bit bitter. They never have the sweetness of in-season squash. But the bolder flavors in this do help boost the flavor of those off-season imports.