9 February 2017: The Art of Broth and the Comforts of Chicken Soup 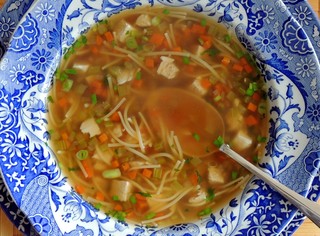 The deep belief in the healing power of chicken soup may well be one of the most universal concepts in the world’s cuisines.
No matter where on this globe one happens to be, if there are chickens in the barnyard and sick people in the house, there will be chicken soup in the pot. The details and flavorings that go into that pot will vary, depending on the culture and the cook, as will the age and size of the bird. It’s often called “Jewish Penicillin” in our country, but the faith in it as a curative really has no territorial or cultural boundaries.
The really interesting thing is how completely our strong emotional preferences with this soup give away our cultural background, a fact brought keenly home by a recent conversation with a culinary colleague and her academic historian husband. They both love to dabble in the cuisines of other cultures, but when it came to chicken soup, there was a line in the culinary sand, and her usual tolerance for his curious, exuberant experimenting ran dry.
When he tried adding rice, it was the last straw.
“Rice!” she grumbled. “Can you imagine? Chicken soup is supposed to have noodles in it. Period!”
That pronouncement would be startling not only to many traditional cooks here in the lowcountry, where rice once was to the cuisine what pasta is to Italy, but to many a traditional Southern cook from the past: almost all the old recipes, from Old Virginia, Kentucky, and even western Georgia, included rice.
In my own childhood, I found myself embroiled in a similar battle of wills with my father, whose mountain-born Scots-Irish mother always enriched her chicken soup with milk. I’d be sick and want clear broth and noodles. Could I have that with the milk in a glass on the side? No, I could not: for my father, I needed nourishment, and nothing would provide that but his mother’s soup. And that was that.
It was a struggle that neither of us won, and to this day, I won’t eat chicken soup with milk or cream in it. When winter’s ailments do catch up with me—and sometimes when I just need comfort—only clear broth and noodles, its aroma made heady with lots of carrot, celery, onion, and ginger, will do.
Where that came from, I don’t know, since neither my mother nor my grandmothers made chicken soup like that, but never mind: It speaks to something deep in my soul.

Homemade Chicken Broth
Chicken soup worth having begins with homemade broth. Really: it doesn’t take a lot of time and absolutely no skill. Although it does have to simmer for hours, it does that mostly unattended, and putting it together, straining and degreasing it, all take just minutes.
Makes about 5 quarts

1. Put the chicken and water in a heavy-bottomed 10-to-12-quart pot and add a little salt. Warm it over medium-low heat until scum begins rising to top, about 45 minutes. As soon as the scum begins to form, carefully skim off, and continue to do so as more forms. Do not stir.

2. When the scum no longer forms, let it simmer half an hour. Raise the heat to medium and add the onions, carrot, celery, parsley, thyme, bay leaves, peppercorns, and ginger. Add salt to taste and let it return to a simmer, again skimming. Reduce the heat as low as you can get it and gently simmer, uncovered, for at least 3 hours, making sure it never boils. The surface should just “shimmer,” the steam bubbles not quite breaking the surface. Turn off the heat and let it cool.

3. Strain the broth into lidded containers made of stainless steel, enameled metal, ceramic, or glass. Discard the solids. Let it cool completely uncovered, then cover tightly and refrigerate. When the fat is solidified on top, remove and discard it. Homemade broth will keep 4 or 5 days, refrigerated, or for up to 3 months, frozen.

1. Bring the broth and gingerroot to a simmer over medium heat and simmer for 10 minutes. Add the onion, carrot, and celery. Simmer until the vegetables are tender, about 8 minutes. Remove and discard the ginger.

To really cure their, one has to add matzo balls to the soup. they must be light and fluffy. Shalom!!!

See what I mean? We all have our fixed opinions about it!

It took me a long time to like any form of chicken soup. I tend to prefer an Asian flair with some soy sauce in mine or a recipe I found that makes a soup that is light and lemony. Great article! Might have to try your version!

Kristin, With all the ginger, mine does have a little bit of Asian flair to it, but it still somehow tastes like my childhood even though it's not how my mother made it. Go figure! You might try adding Thai chili sauce and lime juice to it--and maybe a dash of fish sauce. Thank you so much for reading!