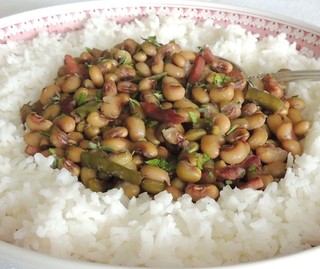 Every year by mid-August, the ancient pecan tree that canopies our back yard and dominates the view from my office window decides “okay, I’m over this” and starts shedding its leaves. By September, more than two thirds of its foliage has abandoned its branches and become a brown, crackling carpet underneath, creating a mocking illusion of autumn amid the stubbornly lingering heat and humidity of a Lowcountry late summer.

It’s still far too hot and sticky to even think of heating up the kitchen with the kind of hearty, rid-sticking fare that welcomes cooler weather, let alone eat it.

And yet: perversely, we start to crave it anyway. Or, at least, I do.

Luckily, summer’s heat isn’t the only thing that lingers in our neck of the woods: fresh produce remains as bountiful as ever, and takes on a mellower, richer, flavor that satisfies the craving for substance without the heat-inducing heaviness usually associated with cool-weather cookery. There are voluptuous, richly-colorful sweet peppers, black-purple eggplants, mellow late tomatoes, sweet potatoes, fat, mature root vegetables, and one of the defining legumes of summer’s table here in the South, fresh field peas.

The delicate flavor and texture of fresh field peas is right up there with tomato sandwiches and chilled watermelon at the top of the list of things that make the South’s brutal summer heat worth enduring. Fresh peas are worlds apart from the dried variety that see us through winter. Once they’ve fully matured and have been dried for prolonged storage, the lighter, sweeter overtones in their flavor are lost and their texture becomes thick and starchy.

But in mid-summer, when the new crop is just coming in, especially when they are dainty white lady, pink-eye, and green crowder peas, they’re so sweet and fresh tasting that they need nothing more than a little salt, a whisper of fresh mint if there is company, and maybe some butter. The late season varieties coming in now, such as mature copper-brown crowder peas, ruddy cowpeas, and black-eyes all beg for more robust seasonings.

The recipe that follows caters to that craving for heartier flavors by enriching the peas with the season’s ripe sweet peppers, late tomatoes and onions, and just a hint of autumn provided by a spoonful of bacon drippings.

If fresh black-eyed peas are not available where you live, they stand up well to freezing, and the frozen variety works well in this recipe. In the Lowcountry, we often serve field peas over rice, but you can serve them without the rice, either as a side dish or ladled into soup bowls as a main dish stew, accompanied by crusty wedges of skillet cornbread.

1. Warm the fat, onion, and both bell peppers in a large, lidded skillet or wide, flameproof casserole over medium-high heat. Sauté, tossing frequently, until the onion is translucent but not colored, about 4 minutes. Add the garlic and toss until fragrant, about half a minute more. Add the peas and tomatoes and toss until they are hot.

2. Add the broth, thyme, bay leaves, and hot pepper pod (left whole); season well with salt and a liberal grinding of pepper. Bring to a boil, reduce the heat to medium-low, loosely cover, and simmer, stirring occasionally, until the peas are tender, about 20–30 minutes, depending on their size and freshness. Frozen peas will take less time; mature fresh ones will take longer.

3. Taste and adjust the seasonings, simmer a minute longer, then turn off the heat. Remove and discard the thyme, bay leaves, and hot pepper. The peas can be prepared up to this point up to 2 days ahead; reheat them gently over medium heat. Just before serving, stir in half the green onions, transfer the peas to a warm serving bowl, and sprinkle the remaining onions on top. If you are serving them Lowcountry-style, with rice, you may ring a large shallow serving bowl or platter with rice, spoon the peas into the center, and garnish them with the onions.

Notes: If you prefer a spicy-hot ragout, seed and chop the hot pepper and add it with the other peppers at the beginning. Fresh black-eyed peas are available seasonally (late summer) and can be found at other times of the year in some specialty and natural food markets.