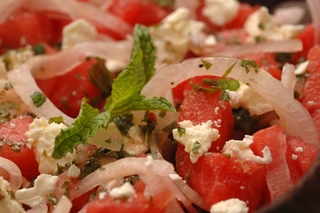 One of the loveliest and most refreshing salads to be found on summer’s table is this simple triad of watermelon, sweet onions, and the bright, salty counterpoint of feta cheese. It should be no surprise, then, that over the last couple of decades, melon salads have become a trendy thing. However, back in the mid-nineties when I first developed this version for my second book, they were almost unheard of in the South, and weren’t much more familiar to the rest of our country.

In my childhood, we ate cantaloupe seasoned with salt and cracked pepper—which was, for all intents and purposes, a salad. My thought was to spin that old idea into something “new” and I was quite smug about my success . . . until my late friend Mary Ellen Greenwood, a grand Southern cook of Greek ancestry, burst my bubble by showing me that all I had done was stumble onto an ancient dish that had been brought to America by Greek immigrants. The version she’d been making since she was a girl varied from mine only in minor detail.

Well, never mind its pedigree. Sweet melon is a lovely foil for the salty feta and spicy onion, and, when properly balanced and lightly dressed, it’s pretty much a perfect combination.

In the ensuing decades since that book was published, melon salads have become a summer staple throughout our country. However, in the interest one can only suppose of novelty, they have also gotten unnecessarily complicated, with cantaloupes and honeydews, cucumbers, and even tomatoes added to the mix. While I’m sure those additions are tasty, in this instance, more is not necessarily better—it’s just more. The most I’d do is follow the lead of Greek cooks and add a handful of brine-cured black olives, pitted and cut into slivers.

1. Cut the inner flesh from the melon and cut it into bite-sized pieces, removing and discarding the seeds as you go and dropping chunks of melon into a large glass bowl. You should have about 8 cups. Add the onion and toss gently to mix them together. This can be done several hours ahead: cover the bowl well and refrigerate until needed.

2. About half an hour before you’re ready to serve the salad, take the melon from the refrigerator. Put the vinegar in a small mixing bowl; add a large pinch of salt, a few liberal grindings of pepper, and whisk until the salt is dissolved. Slowly whisk in the oil a few drops at a time. Let it stand for at least 15 minutes. Before using it, give it a light whisk, taste and correct the seasoning, and whisk to blend them in.

3. Just before serving, scatter the mint over the melon and onion, crumble in the feta, and pour the dressing over it. Toss gently until evenly mixed. Garnish with the sprigs of mint or divide the salad among individual salad plates and garnish each serving. Serve at once.

We made this salad for a book signing once and I have loved sharing it ever since. Thank you