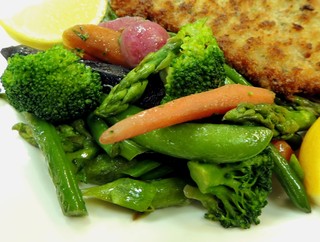 Marcella Hazan’s husband, Victor, recently reminded us that his late wife liked to say, “If I could persuade someone to cook for six months without a single herb or spice, I’d have a chance to make a cook out of her.”

It wasn’t that she had an aversion to herbs and spices: she used them regularly. But she did have an aversion to the prodigal, injudicious over-use of them that is so prevalent in contemporary American cooking. The doses of herbs and spices in her impeccably balanced recipes are quite small, especially when compared to other recipes for the same dish. Where the others might prescribe as much as three tablespoons of chopped herbs, Marcella called for a mere teaspoon.

Her point was not that using herbs and spices was bad, but rather, once a cook understands her main ingredient and knows how to get the most from it without leaning on added flavors, she will know how to make the most of those added flavors when she does use them.

It all comes down to balance, which is one of the hardest lessons to teach an eager young cook, especially in our excessive age of “more is more.” An over-exuberant use of spices and fresh herbs doesn’t lead to the best flavor; it leads to flavors that are buried under an overwhelming culinary smoke-screen.

This came to mind in a recent cooking class when I was teaching the classic old French technique of butter-braising small, whole vegetables, a technique that is well-known and loved by Creole cooks in the Deep South, particularly in the spring when the new roots and sprouts are so bright with their own flavors.

It’s a simple process: the vegetables get an initial blanching in rapidly boiling salted water, to prime them for the braising pan and to help set their color—a step that can be done hours ahead. Just before serving, they’re put into a sturdy, heavy-bottomed braising pan (a shallow casserole with a domed lid for catching and holding evaporating moisture), bathed with a judicious dose of butter, and simmered until they are barely tender, as little as two and no more than five minutes.

The only added flavors are parsley and pepper—and it’s all the vegetables needed. Before they tasted, my students began asking about adding other herbs. One can certainly do that—when the season wanes and the vegetables begin to mature. That’s when a little thyme or marjoram, or perhaps a whisper of garlic or minced shallot would be welcome, but “a little” and “a whisper” are the operative words. A blanket of thyme or marjoram over the sweetness of spring vegetables will not enhance that sweetness, but blunt it with bitterness. And the Victorian pundit who quipped that “there is no such thing as a little garlic” knew what he was talking about.

Think of what happens to a play when an actor in a minor role is allowed to walk off with the production by overacting and stealing scenes. It might be diverting and entertaining in the moment, but it doesn’t make good theater, and it won’t make the play a hit.

1. Scrub the carrots well under cold running water. If they aren’t very young, peel them, but if they’re small, young, and really fresh, peeling them would be a shame. Trim their green tops, leaving a little of the sprout. If the tops are bright and fresh, you may cut back on the parsley garnish to a tablespoon or less, and set the carrot fronds aside to add to it. If the carrots are small, leave them whole; if larger, cut on the diagonal into 2-3 pieces. Scrub, trim and halve the radishes, leaving a little of the sprout attached. Peel the tough parts of the asparagus stems and cut them on the diagonal into 2-inch pieces. Remove the stem end of the beans and cut them in half. Rinse and string the peas, but leave them whole.

2. Bring 4 quarts water to a rolling boil. Add a small handful salt and the carrots and blanch 1 minute. Remove them with slotted spoon to a colander and rinse under cold water. Add the radishes and blanch 1 minute. Remove and rinse as for the carrots. Repeat with the asparagus, haricots verts, broccoli, and peas, blanching 1 minute per vegetable and rinsing each under cold water. Spread them on a sheet pan and let them cool completely. The vegetables can be made several hours ahead, covered, and refrigerated until needed.

3. Melt the butter in a heavy-bottomed braising pan or large, lidded skillet over medium heat. When hot and foaming, raise the heat and add the carrots and radishes. Sauté one minute and add the asparagus, haricots verts, broccoli, and peas. Season with salt and pepper and gently toss until they are hot through. Cover, lower the heat, and simmer until the vegetables are just tender but still bright, about 2-5 minutes, depending on their innate tenderness. Meanwhile, if you’re using the carrot tops, chop or tear them into small pieces. Add them and/or the parsley to the pan, toss, and taste; adjust the seasonings accordingly, toss one last time, and serve immediately.