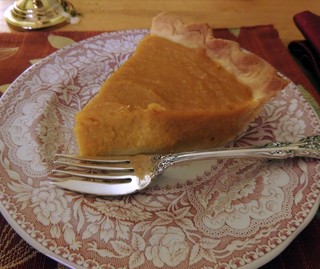 My grandmother's Sweet Potato Custard, a holiday essential in our family for at least four generations

I am not entering into the argument over whether pumpkin pie is a Yankee thing and sweet potato is a Southern one. My grandmother always served both at Thanksgiving, and both sweet potato and pumpkin pie (they were sometimes just called “custard”) were included in one of our earliest published records of Southern Cooking, Mary Randolph’s classic The Virginia House-Wife (1824), and both were included in most every antebellum Southern cookbook that followed, from Lettice Bryan’s Kentucky Housewife (1839) through Mrs. Hill’s New Cook Book (1867).

Why don’t we just call both pies American classics and get on with enjoying them?

Now, it is true that sweet potato custard pies have been defining standards for Southern baking in a way that pumpkin pies have not, and for me, they will always be a holiday essential: My grandmother’s sweet potato custards were a given on our family dessert board throughout the holidays from Thanksgiving through Christmas. And while she did make pumpkin pie for Thanksgiving, it stood right beside sweet potato pies on the dessert board, even though there were also candied yams served with the meal. No matter the time of year that I taste this pie, every bite whispers of autumn leaves, frosted windowpanes, and mistletoe all at once.

For more than twenty years and through eight cookbooks, I’ve tried to reproduce that special something that was MaMa’s touch, both while she was at my side to coach me and in the years since she left us with only memories to guide. This is the attempt from my last book, Essentials of Southern Cooking. I don’t know if I’ve completely succeeded, but if I had to try to describe her to you in a single taste, it would be this one, so I think it’s pretty close.

1. Scrub the potatoes well under cold running water. Put them in a large, heavy-bottomed pot and add enough cold water to cover by 1 inch. Bring to a boil over medium-high heat, reduce the heat to a steady simmer, loosely cover, and cook until the potatoes are tender (a fork or sharp knife should easily pass through). Drain and let cool enough to handle.

2. Meanwhile, position a rack in the center of the oven and preheat to 375° F. to partially bake the piecrusts. Partially bake them as directed in the 23 November 2014 blog, Mastering Thanksgiving IV. Let them cool before filling them.

3. While they’re still hot, peel the sweet potatoes and puree them through a ricer or sieve into a large mixing bowl, or cut them in chunks, put them in the bowl, and mash them well with a fork or potato masher. Mix in the sugar and butter, stirring until the potatoes absorb them, then stir in the eggs, a small pinch of salt, spices, and vanilla. Beat in enough cream or evaporated milk to make the filling smooth and barely pourable—it should still be quite thick and not at all soupy.

4. Pour the custard into the prepared pastry, smooth the top, and bake in the center of the oven until the filling is set at the center and the pastry is nicely browned, about 40 minutes. You may need to rotate the pies midway if your oven is uneven. Cool on wire racks and serve either at room temperature or chilled. If you want to dress it up a little, serve it with a healthy dollop of Bourbon Whipped Cream either on top or to the side of each serving.

1. Chill and bowl and whisk (or the whisk attachment of the mixer) for a few minutes in the refrigerator. Pour the cream into the bowl and by hand or at medium speed with the mixer, whip until the cream is very frothy and beginning to thicken.

2. Sprinkle sugar to taste over the cream and continue vigorously whipping (raise the speed on the mixer to medium high) until it is fluffy and light but not too stiff. Fold in the bourbon, cover, and chill until needed. You can make it an hour or so ahead.

Can't wait to try this recipe, I've always loved this better than pumpkin pie and yes it reminds me of my grandmother also.