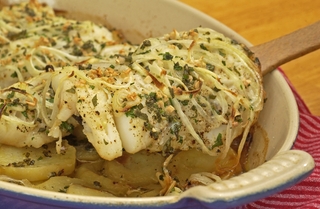 Baked Fish with Potatoes and Onions, an old Southern dish that bears striking resemblance to the cooking of Liguria, is just the thing to begin a Lenten discipline in your kitchen. Photograph by John Carrington Photography
Mae West, the sultry comic who made a career of poking fun at the straight-laced mores of her day, once approached a priest with her signature line, “So, Father, why don’cha come up sometime—and see me?” Thinking to get the better of her, he quipped, “Miss West, I’d love to, but it’s Lent.” Giving him a sidewise glance, she murmured, “oh, yeah? Well, when ya get it back, come on up!”

Unless you are part of a Christian liturgical tradition, like Miss West, you may not realize that Lent is upon us, and that today, commonly known as Mardi Gras or “Fat Tuesday,” is not just an annual excuse to eat, drink, and do everything within your reach in extreme excess, but a preamble to a season of penitential abstinence.

The point of Fat Tuesday is not one last blast of self-indulgence, but a means of purging the house of fat and other luxuries for a season of thoughtful abstinence. But then, we Americans have always taken an attitude that if a little is good, a lot will be better, so it’s not surprising that the ritual purging has gotten out of hand.

What always surprises me is how far out of hand the abstinence of Lent can get. People who observe it make a lot of what they are giving up: alcohol, butter, chocolate and other desserts—a favorite snack food. And they often do it to such extremes that it becomes less a discipline than just another form of silly self-indulgence.

It’s true that Lent is often characterized by what has traditionally been forbidden at the table, but “giving up” is not the point. This is not a time for obsessing over what we’re not eating, but a time disciplining ourselves with what we do eat: as a seventeenth century mystic put it so well, what good is abstaining from meat if you pile the platter with fish, or giving up butter only to nose-dive into a vat of olive oil?

I had a dear friend who gave up bourbon every Lent only to put away white wine by the case. Now, where’s the discipline in that?

Contrary to the widely held belief that I buy butter in ten-pound blocks and heavy cream by the gallon, my diet is hardly what one would call extravagant. Still, it surprises people to learn that Lent is my favorite liturgical season, and also one of my favorite seasons for cooking.

No, it is not as exuberant as the fruitcake and eggnog of Christmas or roasted lamb and hot-cross buns of Easter, but it is more thoughtful. When we’re disciplining ourselves to avoid richness, it ought to compel us to think more about what we are cooking, and to better appreciate that richness when it is restored to the pot.

I love this time of reflecting on simpler flavors, of reconnecting my table and palate to my inner spirit, of rediscovering and appreciating simplicity and self-control.

There’s a lot to be said for the old rhythm of feasting and fasting, for seasons of spiritual introspection reflected in dietary restraint followed by seasons of exuberant indulgence. In our rampantly self-indulgent age, it is not going to hurt anyone to hold back and rethink not only what we eat but why.

Besides, if nothing else, how are you going to distinguish a feast if it’s all you’ve ever known?

Baked Fish with Potatoes and Onions

This is my own adaptation of my mother’s baked fish with potatoes, colored by a strikingly similar dish from the Italian Riviera. Mama rarely used olive oil in my childhood, but today we both cook with it more than butter. I never completely give up butter at Lent, so the fat I use in this dish depends on the moment. If using butter offends your sensibilities or is off your discipline, then just use olive oil as the Ligurians do.

1. Position a rack in the center of the oven and preheat to 400° F. Scrub the potatoes under cold running water. Put at least 1 inch of water into a large pot and fit it and a steamer insert. Bring to a boil over medium-high heat, add the potatoes to the steamer insert, cover, and reduce the heat to medium. Steam until the potatoes are almost cooked through—about 10 minutes. A knife should insert easily but meet a little resistance in the middle. Remove the potatoes and let them cool enough to handle, then peel and slice ¼-inch thick.

2. Lightly rub a 9 x 13-inch bake-and-serve dish with butter or oil and put in the potatoes and 2 tablespoons of the fat. Toss gently to coat and then spread them flat in a single layer. Separate the onions into rings and scatter half of them over the potatoes. Season generously with salt, a liberal grinding of white pepper, and sprinkle on half the herbs. Put the dish into the oven and bake until the onions wilt and begin to brown, about 15 minutes.

3. Remove it from the oven and lay the fish fillets over the top in a single layer. Season well with salt and a generous grinding of pepper. Scatter the remaining onions, sage, and parsley over them, drizzle with the remaining fat, and bake until the fish is just cooked through and the onions are lightly browned, about 20 minutes more. Serve hot from the baking dish.
2 Comments

Beautiful, Damon. As a fellow Episcopalian, I really relate to this and want to share it with Jim (my husband) as I know it will be meaningful to him as well. I used to go through the tortures of the damned, trying to figure out what to give up during Lent, but then I realized that what was best for me was to do my extra-best to help others during this time. I've taken on the co-chairmanship of our pastoral care commission as part of that. While it takes more time than I might like, it does help to fulfill the commitment I am making, not only for Lent, but beyond.