26 November 2014: Mastering Thanksgiving VIII—Turkey Down to the Wire 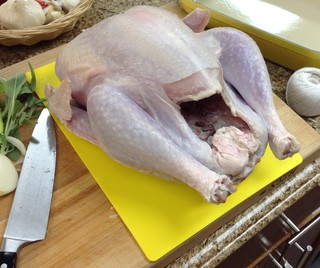 If you're worried that your turkey will still look like this when the company's coming through the door, relax: it won't. But you need to get moving now!

Until now, this series has been about planning ahead, doing ahead, and keeping calm. This installment, however, is for those of you who have, until now, done none of that, either because cooking the dinner was not supposed to be your worry or because you’re a world-class procrastinator.

It doesn’t matter why you’re not prepared, and the purpose of this is not to shame or judge you. But if for whatever reason you’ve just now decided you’re going to cook Thanksgiving Dinner or have had it thrust upon you by someone who would brook no refusal, the secrets are still to plan ahead, do ahead, and stay calm.

Think of this as Mastering Thanksgiving for Procrastinators and Poor Souls Who Cannot Say No.

First, put down that bourbon, take a deep breath, and know that you can do this: If you shop before five today, there is still time for you to pull off a very nice dinner. There will, however, be limitations, so if you’ve started to fanaticize about a perfect, completely home-cooked meal, forget it and be prepared to take a few short cuts.

The Art of Delegating is a great skill to have whether you plan at the last minute or not. If you’re a control freak and perfectionist, rein it in and learn the fine art of getting other people to not only to offer, but to enjoy doing things for you.
• Ask invited guests to bring something that they couldn’t do without.
• Ask the non-cooks on the list to come early and press them into service cleaning up, setting the table, arranging flowers, building the fire, or walking the dog.
• Put the kids to work. So what if they’ve never done anything in the kitchen but whine and press the microwave keypad? They’ll hate you for exactly five minutes, but if they’re invested in the meal, they’re more likely to eat and enjoy it.
• Compliments work: preface your request with “nobody can make those wonderful (fill in the blank) the way you can . . .” and, trust me, they’ll not only do it, they’ll think it an honor instead of a lot of extra work.

Turkey Notes:
• Buying: fresh is your only option. It’s too late to safely thaw a frozen turkey, so if you don’t already have one thawing in the fridge, or bought it but forgot to start thawing it ahead, leave it in the freezer.
• Getting it ready: if you’re just now buying it, unwrap it, remove the giblet packet and neck, put it in a rimmed pan, cover it, and put it in the fridge until you’re ready to dress it.
• If you already have a frozen turkey thawing in the fridge and it still isn’t fully thawed tomorrow morning, you can speed it up by unwrapping and COMPLETELY submerging it in cold water mixed with one tablespoon sea or kosher salt per quart. Cook it as soon as it’s fully thawed.
• Cooking it: make sure it’s fully cooked before serving: an instant read thermometer inserted into the INSIDE of the thickest part of the thigh (without touching bone) should register 160° F.

Stuffing/Dressing Notes:
• Buying it: Though stale homemade bread and cornbread make the best stuffing and dressing, stuffing mixes can save a lot of time. The trade-off is that they’re often over-seasoned and have things in them you don’t want to think about. Look for a minimally seasoned stuffing mix that has the fewest processed ingredients.
• Getting it ready: to refresh stuffing mix and give it a homemade taste, sauté and add a medium chopped onion and two chopped ribs of celery. If the mix doesn’t have herbs already, refresh it with a handful of fresh chopped sage. Other good additions include the grated zest of a lemon, a few strips of diced, cooked bacon, the chopped cooked turkey liver, or half a pound of crumbled, cooked sausage.
• Cooking it: Dressing is easier to cook than stuffing since you don’t have to stuff and truss the bird: if you want the taste and moistness of stuffing, pack it into a casserole, baste it with a little of the roasting juices, and bake it, covered, at 350 degrees for about 30 to 45 minutes, or until hot through and set.

On the Side Notes:
• The Cranberries: if you have a snob inhibition over canned cranberries, get over it: you no longer have the luxury of time to indulge it. Refresh canned whole berry sauce by heating it with julienned orange zest and a splash of bourbon.
• The Veggies: Steamed broccoli, Brussels sprouts, and cauliflower are all easy and traditional. Fresh vegetables don’t take significantly longer than frozen ones and they give the whole meal a from-scratch, homemade character.
• The Sweet Potatoes: Once they are drained, rinsed of their syrup, seasoned with spices and brown sugar, mashed up, and baked in a casserole, no one will know the sweet potatoes in your soufflé were canned.
• The Bread: frozen thaw-and-bake rolls may not be as good as homemade, but Sister Schubert’s Parker House rolls are pretty darn good, and freshly baked bread will fill the house with a homemade aroma that can’t be imitated.
• The Dessert: don’t make shortcuts here. Make the pies yourself. To save stress, make them tonight or early tomorrow morning. One time saving compromise that works is a high-quality refrigerated pastry that you unroll and put into your own pie pan. If homemade pie really is beyond you, at least make your own whipped cream: that’ll cover up a lot. Or, better yet, pass the job off to someone else . . . accompanied, of course, with your best smile and sweetest compliments.

In General: Keep the finishing touches real – use real butter, real cream, real homemade gravy. If the crowning touch is homemade and tastes it, then so will what’s underneath it.