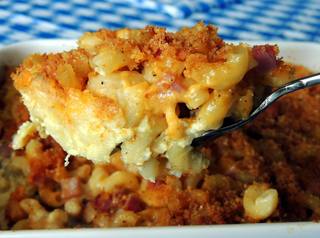 Ham and Macaroni Casserole, or, as it's often known in the South, "Macaroni Pie with Ham" is classic Southern Comfort food and a perfect way to refresh the leftover Easter ham.

One of the all-time great Southern comfort foods is a simple, homey casserole of elbow macaroni laced with grated sharp cheddar cheese and set in egg custard. Known both as “macaroni and cheese” and “macaroni pie,” they’re found all over the South, in some places topped with cracker or breadcrumbs, and in others simply with a sprinkling of grated cheese or a dusting of black pepper.

Sometimes, particularly after a holiday when the cook has a surplus of leftover ham, macaroni pie is studded with a cup or so of diced cooked ham. It’s a simple and lovely way to use up the Easter ham, but it’s also good enough to be a reason for buying ham at any time of the year, just so one can make it. Sometimes, when the cook has taken a notion to be fancy, or the casserole is destined for a bereaved family or shut-in, they’ll add a cup or so of thawed frozen green peas, turning it into a perfect one-dish supper.

1. Position a rack in the center of the oven and preheat to 350° F. Lightly butter a 2 quart casserole. Bring 4 quarts water to a rolling boil in a 6 quart pot. Toss in a small handful of salt and stir in the macaroni. Cook until it’s slightly less than al dente, about 4-5 minutes or roughly half the time given in the package directions. Drain.

2. Put the hot macaroni in the casserole dish, add the grated cheese and ham, generously grind pepper over it, and gently toss until evenly mixed. Whisk together the eggs, mustard, and a large pinch of salt in a mixing bowl and gradually whisk in the milk. Pour it evenly over the macaroni.

3. Melt the butter in a skillet over medium-low heat and turn off the heat. Add the breadcrumbs and toss until they’ve evenly absorbed the butter. Sprinkle them over the top of the casserole and bake until the crumbs are golden brown and the center is firm, about 30-35 minutes.