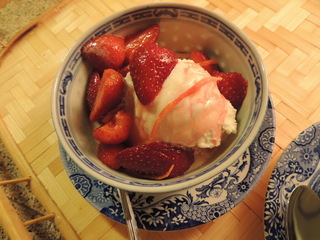 Spring in a bowl: strawberries macerated in bourbon and lemon

It’s usually a mistake to assume that someone who looks back to history is somehow bound and gagged by the past. Yet, the prejudice is commonplace, and seems to be especially prominent in the culinary community, where so-called “cutting edge” trends whiz past at light speed, seemingly leaving us dusty old historians behind to stew in our own marmite.

The mistake is the assumption that anyone who looks back is not moving forward, but all too often the opposite is true, and ignorance of the past (or a summary dismissal of it as irrelevant) leads not to daring innovation, but ill-advised caprice. And contrary to popular belief, a thorough understanding of the past, of how cooks have traditionally used ingredients and paired flavors is never confining to an open minded cook: indeed, it can be wonderfully liberating.

Understanding the past doesn’t confine one to it; quite the contrary. It actually frees us. Once the principles of a particular tradition are mastered, they channel the imagination, providing a solid foundation on which to build real and lasting innovation.

Take this lovely recipe for one of spring’s ultimate flavors. If you look back in history, you are not likely to find anything like it, yet there’s a logic to macerating fresh berries to mellow perfection in bourbon whiskey that the cooks of the past would immediately understand. What’s more, its elements—the sweet-tart berries, bourbon, raw (they just called it “brown”) sugar, and bright citrus zest—have been commonplace in Southern kitchens for centuries.

I’ve only been making it for more than twenty years, now, and wouldn’t presume to call it “historical.” Yet, I would also not call it original to my kitchen, because it’s so solidly rooted in the traditions of Southern cooking that have nurtured and informed my entire life as a cook.

2. Put the berries in a glass, porcelain, or stainless steel bowl. Add 1/3 cup of the sugar, the lemon zest, and the bourbon. Squeeze in the juice from one of the lemon halves using a sieve to catch the seeds. Toss until the sugar is beginning to dissolve, then set it aside and let it macerate until the sugar is completely dissolved, about half an hour.

3. Taste and adjust the sugar and lemon juice, then let it sit another half an hour. Bourbon-macerated strawberries make a wonderful topping for vanilla, caramel, or ginger ice cream. They can also be used as a filling for old-fashioned shortcake.

This sounds so good to me...will be sure to try on some of the Carpentras strawberries next month