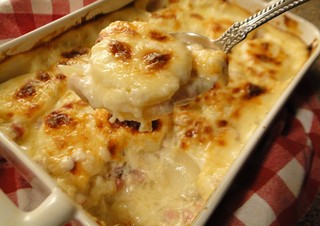 It was my first night in Italy. Our class had spent the day sketching in the picturesque port towns of Portofino and San Frutuoso. Soaked with Riviera sunshine and salty Ligurian air, we came back to the school, a villa that commanded its own picturesque view of the Bay of Genoa over the red-tiled rooftops of the old city. We were exhilarated, exhausted, and very hungry, as only active young people can be.

Already, I’d had my first focaccia, real pizza, and spaghetti alla carbonara, and was game for anything. Our cook, Ilda, had long since gone home, but she’d left something for supper that she just called casseruola al forno. That just means “baked casserole,” so it did little to satisfy our curiosity. With its blanket of béchamel scattered with cheese, it looked a bit like lasagna, so we hopefully popped it into the oven and made a salad.

As the aroma filled the house, rich and tantalizingly Italian—it somehow seemed oddly familiar. At last it came out of the oven—its top handsomely browned and bubbling—and we hurried to the table with it. The spoon pierced the golden brown top, the creamy filling oozed out. Plates were passed and at last one landed in front of me. I raised my fork, tasted, and was immediately enveloped by the memory of a dozen covered-dish suppers back home.

Our exotic Italian casserole was only scalloped potatoes with ham, the ultimate comfort food. It was a dish that I (and thousands of other Southerners) had cut my teeth on. It was the best way to end my first day in a strange new place. It was also not the last time I would be startled by familiar flavors in what was for me an exotic new cuisine.

I brought the recipe for that Italian casseruola al forno home and for more than thirty years, it has been a favorite supper dish in my Southern household. You see, real comfort is ageless and has no nationality.

1. Put the potatoes and enough water to just cover them in a heavy-bottomed pot over medium-high heat. Reduce the heat to medium and cook until the potatoes are barely cooked through, about 8 minutes. Drain and set them aside until they are cool enough to handle. Position a rack in the upper third of the oven and preheat it to 375° F.

2. Melt the butter in a saucepan over medium heat. Sprinkle in the flour and whisk until smoothly blended. Slowly whisk in the hot milk and whisk until it begins to thicken. Reduce the heat to low and simmer, stirring frequently, until thick, about 10 minutes. Season to taste salt, white pepper, and nutmeg, and turn off the heat.

Notes: In the South, most traditional cooks use cheddar cheese for this dish. If you prefer it, substitute 1¼ cups of sharp cheddar for two cheeses called for above. You can also omit the ham for a meatless version of the dish.

Much as I love an extra- sharp cheddar cheese, I think the secret of this recipe is the Gruyere...not sure why! And when you add Parmagiano Reggiano to that...WOW!

Pam, it's because Gruyere is more compatible with ham. I love a good cheddar, but once I'd had Ilda's version (and she used a so-so Northern Italian Gruyere-style cheese), there was no turning back.