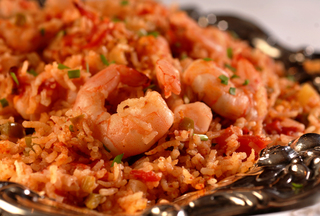 Shrimp Pilau with Tomatoes is a Lowcountry summer classic. Photography by John Carrington
One of the great defining rice dishes of Carolina and Georgia Lowcountry cookery is the pilau, (pronounced PIH-low—or, at times, PER-low, PER-loo, or per-LOO). Descended from the rice-based cuisines of West Africa, from whence the Lowcountry’s rice culture and most of its rice-growing slaves had come, a pilau is less a recipe than a technique. There are hundreds of variations, including the famed Carolina Pilau, made with chicken or game birds, and the euphoniously named Hoppin’ John, made with field peas.

Unhappily, the pilau technique is all too often misunderstood.

For example, ever since Italy’s risotti became popular in America, pilaus have often been likened to them. While it’s true that both are made with rice, are technique-driven concepts, and usually begin by briefly sautéing the rice in a little fat of some kind, beyond that, they have absolutely nothing in common.

In the end, a properly made risotto consists of distinct, al dente grains of rice held together by a creamy sauce. A properly made pilau consists of tender rice that is fluffy, distinct, and separate, with no binding sauce. Those separate grains are so critical in fact that the rice is washed before cooking to remove as much of the surface starch as possible.

Perhaps pilaus are presented as similar to risotti because the two are such important, defining concepts in their respective cuisines, and the latter have become so popular that most people know about them. But as you see, the two techniques and resulting dishes are so different that these comparisons are more misleading than helpful.

You will need to have the right kind of rice. Carolina Gold, the famed Lowcountry rice from which the region’s pilaus were first made, is a mild, nutty, long-grain rice. Because its grains are a little shorter and fatter than most long-grain rice, the risotto technique can be used with it, though the results are never quite as satisfactory as they are with the short, fat-grained rice for which the technique was created. Most other long-grain rice varieties are too slender and brittle to stand up to the constant stirring: the end result is not distinct, al dente grains enrobed in a creamy sauce but more of a mushy porridge.

Conversely, should the pilau technique be applied to a short grained Italian rice such as Arborio, Carnaroli, or Vialone Nano, the end result would be an unsatisfying cross between creamy risotto and fluffy pilau—in short, a mushy porridge.

The nicest difference between the two techniques is that pilaus are a lot less work, and that makes them ideal for summer cooking. Here’s a particularly lovely summer pilau that will help you master the technique.

Because the famed Carolina Gold was grown right next to salt marshes teeming with brown inlet shrimp, shrimp pilau seems an especially appropriate way of illustrating the proper execution of the technique, especially since those shrimp are seasonal in summer. Most old recipes called for the shrimp to cook in the rice for the entire time, but while this does add more flavor, it makes the shrimp tough. For maximum flavor without sacrificing the shrimp’s texture, modern cooks use broth made from the shells for flavor and add the shrimp at the end.

When tomatoes are out of season, or if the fresh tomatoes available to you are not up to par, you can substitute canned whole tomatoes, peeled, seeded, and chopped, with their juices, but it will never taste a lovely and fresh as it will be made with freshly-harvested vine-ripe tomatoes.

1. Peel the shrimp, completely removing the tails, and reserve the shells. Cover and refrigerate the shrimp. Put the shells into a saucepan with 3 cups water. Bring them slowly to a simmer over medium heat, watching carefully as it will foam up and tend to boil over. Reduce the heat to a simmer and cook until the liquid is reduced to 1 cup. Strain, discarding the shells, and set the broth aside.

2. Put the bacon in a deep skillet or flameproof casserole over medium heat. Fry until the fat is rendered and the bacon is browned. Spoon off all but 2 tablespoons of fat, add the onion, pepper, and celery, and sauté, tossing occasionally, until softened but not browned, about 5 minutes. Add the garlic, bay leaf, and parsley and toss until fragrant, about half a minute.

3. Add the rice and stir until it’s evenly coated with fat and beginning to toast, about a minute. Add the tomatoes, shell broth, and hot pepper, and season well with salt and pepper. Stir once, let it come back to a boil, and reduce the heat to the lowest possible setting. Cover tightly and simmer 12 minutes, or until the liquid is absorbed.

4. Carefully fold the top grains of rice under to the bottom. Don’t stir—fold it. Spread the shrimp over it, cover tightly, and the steam build for a minute. Turn off the heat and let sit, tightly covered, until the rice is tender and the shrimp are pink and cooked through about 8 to 10 minutes. Scatter the basil over it and fluff with a fork, tossing to mix in the shrimp, and serve at once.
12 Comments

I grew up on Chicken Perloo, thanks to my grandmother,and still enjoy it making it, but I've never tried shrimp. Thanks for sharing your recipe. On a rare occasion my mother, and grandmother would add diced tomato to the chicken perloo. I once told a friend that, and she "poo poo'd" me, saying it wasn't "real" perloo. I felt a little miffed then, but seeing you add tomato to the shrimp pilau (perloo in my family) adds a sweet taste of redemption.

Oh, my dear: I think every cook who makes pilau is convicted that theirs is the One True Way, and that all other versions are imposters! I had a reader take me to task for suggesting pancetta as an alternate ingredient, saying it was an Italian ingredient and bacon or SALT-CURED SIDE MEAT would've been more "Southern" . . . never mind that Pancetta is . . . salt cured pork!

I had to explain that I often suggest pancetta because it's almost universally available nowadays, whereas dry-salt-cured side meat is not.

Just if you're interested, this is a blog post I did back in November when I last made chicken perloo. If you scroll even back further on my blog to some time in May 2012, you'll see a post too on Mint Juleps, where I gave you props and a little blog lovin'. You don't have to publish this particular comment, Damon, I just thought you might want to see my posts. take care!

Happy to post and give you a little plug from here!

In Horry County, South Carolina, it is called "Chicken Bog". My father and workers would make it in an iron pot over an open fire while buying, shelling and storing field corn from the community farms. If I gave you the secret family recipe, I would have to kill you. I will definitely try Shrimp and Rice. It sounds divine.

I am currently reading "Classical Southern Cooking" cover to cover. A great read with fabulous southern recipes, history, culture, and humor. Thank you for this wonderful work. I cannot wait to get to the kitchen and get out the lard, butter, and cream!

Teresa, actually Chicken Bog is not the same thing as Chicken Pilau (or perloo). They're similar, but most Bogs are a lot wetter than a pilau, which is almost rattle-the-plate dry.

Thanks for all your kind words about Classical Southern Cooking. It really was a labor of love and when it gives a reader that kind of pleasure and inspiration, I feel as if it has been worth it.

By the way, this site doesn't show a comment until it has been approved by the moderator, so that's why your comment didn't show right away.

Thanks so much for visiting, reading, and caring enough to share in the conversation!

Just to elaborate a wee bit and clarify the origin of the Pilau. Before Africa it started out probably in India but had a huge influence made upon it by the ancient Persian's. The name itself is a combination of Sanskrit and Persian.
Your recipe is outstanding and I probably will make a big batch for Sunday afternoon Supper (I'm drooling like a Rottweiler as I type this :)))
If you ever get a chance try out some recipes for Persian Jeweled Rice called Javaher Polow which reminds us of Christmas time. Also try Kabuli Palow (Afghan) which is traditionally made with lamb or chicken. Tiger shrimps, monkfish or Rainbow trout work great in it too :)))

Thanks and I found a bunch of recipes here to try out and added a couple of your books to our "Must Have" list.

Have a wonderful day,
Brandon

Yes, sir, I know the ancient origins of pilaf/pilau of course: but it wasn't really pertinent to the story at hand. The Lowcountry versions of pilau owe most of their heritage to West Africa and a little to Provencal cookery. Both cuisines of course derived their versions from Persia by way of the Ottoman Empire. It was rarely talked of until recently, but the enslaved West Africans who were largely responsible for Carolina's rice culture were actually Muslim. It's an interesting spiral in history, but it was more than a short essay on the Lowcountry pilaus needed to get into.

I would very much like to follow you through my emails. Is there a way I may do so. I'd hate to miss one of your recipes and stories!

I'm afraid I don't have a newsletter yet. I just haven't been able to work out the logistics of it. But if you are on Facebook, I post links to all my recipes and stories entries and to all my newspaper columns on my author's page under Damon Lee Fowler. Meanwhile, thank you so much for your interest in my work. If you send me a message through this site, it will come through to my personal email and I'd love to hear from you! All my best,