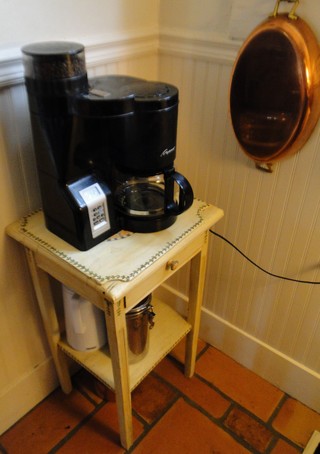 I don’t need a physicist to prove to me the law that objects at rest tend to remain at rest. All I have to do is look around my own house.

We really are creatures of habit, and once something comes to rest in a spot, that’s where we tend to leave it. That may not be a particularly Southern trait, but anyone who visits the South could certainly build a strong argument in its favor. We Southerners are masters at design by default, and when we get right down to it, I rather suspect that the main reason the South is so littered with historical artifacts has less to do with a heightened sense of history than the unattractive fact that we just never got around to tearing them down or throwing them out.

But I am digressing—another deeply Southern tendency. The point is that my house has, until recently, been a living example of the law of the moment of inertia. When we moved into it, things were all too often put down in the most convenient spot for the moment. Four years later, a lot—no, most—of those things are still where we dropped them.

The kitchen, I blush to admit, is one of the worst spots. The house dates from the early twentieth century, when kitchens in middleclass suburban homes were small and utilitarian. True to form, this kitchen is cramped and dark (its only windows were closed off by modern “improvements”); moreover, it features ancient cabinet work, a diminutive breakfast nook (whose cabinetry was taken away to make space for a powder room), and an awkward pantry under the stairs, none of which contribute to the room’s overall usefulness. Since counter space was at a premium and I didn’t want to clutter it up with appliances, the coffee pot landed on the table in the breakfast nook, just until we could get a piece of furniture large enough to hold it but small enough to fit in the narrow space between the back door and said-same table.

It has been there ever since.

Taking up nearly half the surface area, it made the table cramped, uncomfortable, and impossible to use. We’d eaten exactly one meal at it in all of those four years.

Then, last fall, the unthinkable happened: our house was broken into and ransacked. A lot of the beautiful silver that has graced my food photography for the last two decades was taken. Fortunately, the thieves were startled and left in a hurry, so that’s about all they took. But it was enough to really shake us up and force us out of our sedentary complacency.

When something like that happens, the only way to reclaim a house and make it a home again is to force change. It was time for that coffee pot to move. Never mind that we’d never discovered the perfect piece of furniture to hold it. We’d just have to find something that would do.

I’d made a half-hearted visit to a couple of furniture stores when all of a sudden, it occurred to me that we might already have just the thing. Right next door, in that diminutive powder room, was a hand-painted end table that had been plopped next to the water closet for much the same reason that the coffee pot was on the breakfast table. Not only was it contributing absolutely nothing useful, it was taking up space in a room that already made an airplane toilet seem spacious. It even had a shelf for the coffee bean canister and a drawer for the filters, both of which had been cluttering the cookbook shelf.

All I had to do was shift my thinking a little to the corner of the breakfast nook. It took exactly two minutes to move the table and put the coffee pot on it. Another two minutes cleared its drawer of all the things that were still in it from when it had been next to my desk in my office—two houses ago.

It was a small change and not particularly brilliant: seeing it would probably have given my design professors apoplexy if they weren’t already dead. But it was just right, and what a difference it has made. Now all the coffee things are together in one place, we eat at that table nearly every night, and my little kitchen, which before had seemed so dingy and uninviting, is so much more pleasant that I’m actually inspired to spend time in it.

It just goes to show that sometimes, it’s the small things that can make the biggest difference, and that which can give a cook renewed inspiration may not necessarily have anything directly to do with cooking.

Great post Damon. Having recently downsized moving from a 3,000 square foot open concept home in Hawaii to a 1200 square foot Charleston Single forced me to be very creative in placement of items. We still need more book shelves upstairs to contain a too big collection of cookbooks that I have culled, but not enough. I did enjoy this post. I also think your readers would love to see more of your kitchen. When I lived in NYC in The Village, I had a very tiny kitchen and was still able to make lots of great meals from it, though it took some creative thinking and daily instead of weekly shopping.